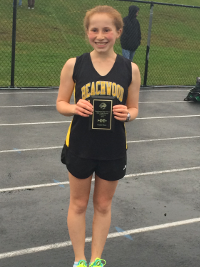 “I thought it was a great day,” said Beachwood coach Jamie Lader. “They did outstanding in the conditions since it was pouring. I was real pleased to see Jack win at home. That’s a big win. He took control out there. I was real impressed with Leah too. She had a super time on a wet course. Times on the course were a little slower because of the weather and there are a lot of hills. I thought it was an outstanding day for everybody. There were some nice times and it was a real competitive feel for the race.”

Spero ran away from the field to win the race in 18:24.6. The second place runner finished almost a full minute behind at 19:11.4.

“That was about 30 seconds slower than his PR but he really didn’t have anyone to run with,” Lader said. “He was all by himself. He had a smile on his face the whole time. I saw him with about 1,000 meters to go and told him where he was. He was just smiling. After the race he came up to me, he’s always a great kid, but after the race he came by and said thanks for your support. He was really ecstatic.”

“Alex Remer had an outstanding showing; he’s been very consistent,” Lader said. “Seniors Ian Mitchell and Adam Moses have been integral parts of the team. They really came through and picked up some places at the end to kind of boost us and Pete Bruening, that was his last home race. It was a great effort by him. It was great to see him run so hard. He did a great job for us.”

In the girls’ race, Roter finished in 22:07.9, less than a minute behind the first place runner.

“She was a little disappointed with her time but once I talked to her at the end and told her how proud of her I was it really brought a smile to her face,” Lader said. “She’s a really soft-spoken kid. She doesn’t smile all the time so when she does smile she’s really happy. She was really pleased with herself. Once she saw the big picture, the times everyone else was running, she saw it. It was great. Some of the other coaches came up to me and asked what grade she was in. They couldn’t believe she was a freshman. That was a nice thing for her.”

“Finishing second in the girls’ race was a heck of an accomplishment,” Lader said. “Cathy Perloff has benn running really consistently and Kalina Pateva and Emilykate have been very consistent as well. Esther keeps on dropping time. She dropped almost four and a half minutes off her time and is becoming part of the varsity. She’s a really hard worker.”

The Bison return to action on Saturday when they compete in the 2014 Chagrin Valley Conference meet at Perry.