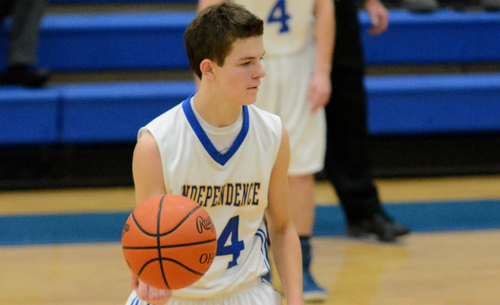 Kyle Stefanski scored a game-high 23 points and Independence’s defense did the rest in a 56-48 win over Lake Ridge Academy on Friday.

Alec Jendre added eight points for the Blue Devils and Ryan Dworznik and Matt Terrano both chipped in with six.

“Kyle Stefanski led us in scoring, which was great to see him being aggressive,” said Independence coach Hugh McMahon. “Alec Jendre, Bobby Roddy and Nick Brunsman all did a great job on their leading scorer in holding him to only 13 points. We had great point guard play from both Matt Terrano and Harley Glime with Matt doing a great job in the fourth quarter. My assistant coaches, Coach Robinson and Coach Johnson, did a great job of recognizing defense of changes. I am very pleased with everyone's effort. It was definitely a team win.”

Independence broke open a game that was tied three times in the fourth quarter.

“We were able to pull away from Lake Ridge Academy because we were resilient,” McMahon said. “The score was tied at 40, 42 and 44 in the fourth quarter. Different players stepped up to hit big shots during this span. We were down, 46-44, and Ryan Dworznik hit a big three-pointer for us. We also played our best defense of the game down the stretch.”

“Tonight was about intensity,” McMahon said. “I think everyone that played gave maximum effort and was focused on executing on the next trip up the floor. We did not let any mistake get us down, but instead refocused on playing the game the right way.”