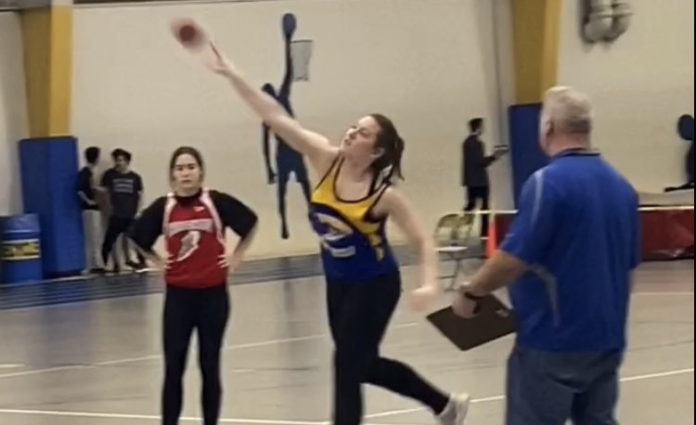 Sure, her contribution to the volleyball team playing in three straight state championship matches was impressive. And her efforts on the basketball court helped the Blue Devils finish the 2019-2020 regular season with a 22-0 record.

But, when she threw the shot put 37-feet, 7 ½-inches last week, she rewrote the school record which had stood since 2012.

“It was exhilarating,” Stepanik said of breaking the record. “I’ve been working hard to get that mark and it most definitely paid off.”

Kelsey Lest held the record for nearly 10 years. She cleared 35-feet, 4-inches.

Stepanik learned of the record two years ago and set a goal to beat it.

“My dad and Coach Clymer made me aware of the record sophomore year,” she said. “My goal was to try and beat it last year, but with the season being canceled I didn’t quite get the opportunity.”

Two years ago, at the Division III district meet, Stepanik placed seventh with a toss of 31-feet, 11-inches.

She’s come a long way since then and she’s not quite satisfied with just setting a new school record.

“I now know what I’m capable of, so I’m excited to see how much more distance I can potentially add to my throw in the upcoming meets,” she said. “My goal is to beat my own record and keep adding distance to my throws. My end goal is hopefully states.”