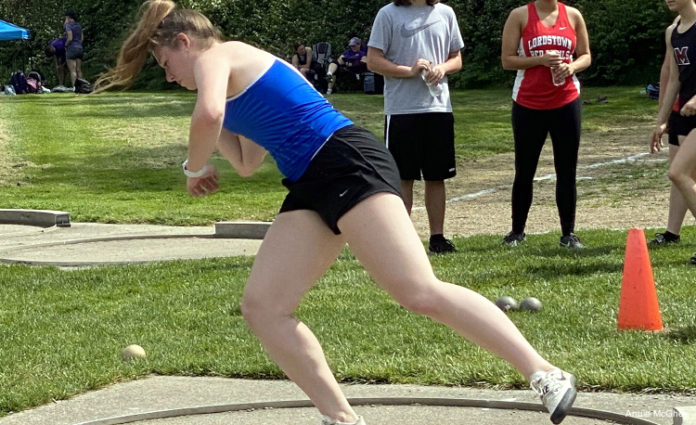 Stepanik, who placed seventh in the shot as a sophomore, won the event with a toss of 35-feet, 11 ¼-inches.

“It was super exciting, especially to reach my goal,” Stepanik said. “I was very excited to come out on top.”

While she missed her goal by a couple of inches, Stepanik was pleased to win the event and to move on to next week’s regionals with an opportunity to qualify for the state meet.

“I wasn’t satisfied with my throw but I was happy that it got me where I needed to be,” she said. “I know I need to put extra work in during practice to get ready for regionals.”

Several other Independence athletes qualified for the regional meet.

That group included Lucas Martinez, who cleared 10-feet in the pole vault to finish second overall.

Both 4×800-meter relay teams advanced by finishing among the top four.

Seniors Makenna McGhee and Paige Westerburg teamed up with sophomore Gabrielle McGreevy and sophomore Kate Coljohn to finish third in the girls’ race with a time of 11:48.07. Seniors Collin Patton and P.J. Oschmann and sophomores Kyle McGovern and Joe Shumay placed fourth with a time of 9:18.46.

Independence qualified a host of athletes into Friday’s district finals.

The boys’ 4×400-meter relay team of Taliaferro, Andryszczyk, Patton, and Zygmunt finished third with a time of 3:39.11 and will run on Friday.

Independence’s boys’ team finished day one in second place with 18 points. The Blue Devils’ girls’ team is in first place with 19 points.

Stepanik was pleased to do her part in setting the Blue Devils up as a team but she knows it will take each athlete performing at a high level to win the district title.

“It takes every person in their field event to do their job and score,” she said. “Individually, we go into these meets knowing that we need to do our job to contribute to the team.”