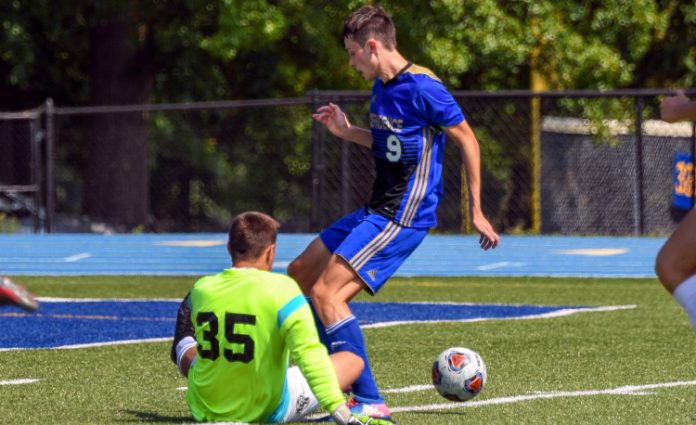 “That was a good win,” said Independence coach Ryan MacRaild. “They’re very well-coached and organized. They were very sound defensively and had a nice counterattack. It was a good back-and-forth game, very clean. The referees weren’t a factor really and didn’t make a lot of calls because everybody was playing soccer. Even the ref came up to us afterward and said, ‘Congratulations, that was one of the smoothest and easiest games,’ for him.”

Keystone kept Independence keeper Braden Flynn busy in the first half but Flynn defended his net and kept the Wildcats off the scoreboard until midway through the second half.

Independence adjusted its tactics in the second half and that allowed Stralka to score the equalizer shortly after Keystone took a 1-0 lead and then the game-winner with just over four minutes remaining in the game.

“We made a couple of adjustments and tried to move the ball a little quicker with some better passing,” MacRaild said. “Casey (McGhee) found a nice ball over the top and he timed it up just right. We had a great shot on a through ball up top and finished it. The other one, we kind of built it up out of the corner. It was another give-and-go and a hard finish into the back of the net.”

The Blue Devils played without Sam Eisenmann in the midfield, which coupled with Keystone’s aggressiveness on defense, created a unique challenge for Stralka and the rest of the Independence attack.

“Keystone gave us a defensive look unlike anything else we have encountered this year,” Stralka said. “They posted four defenders in an arc around just short of what was typically the midfield and kept one person back as a sweep. We did not have Sam for the game and lost the aggressiveness he usually brings to the midfield. The formation created a real battle in the middle, with relatively few shots on goal from both teams, and consequently, there were only a few scoring opportunities.”

MacRaild’s second-half adjustments allowed the Blue Devils to create multiple scoring opportunities and McGhee and Stralka connected on two of them.

“In the second half, we had to step up our game to gain control of the ball,” Stralka said. “Casey and Charlie (McGreal) both became more assertive, and we looked to utilize the long-ball more. Casey and I have played soccer together for the past 12 or 13 years, we are aware of each other’s capabilities, and all we need is eye contact to create a play. Twice he was able to find seams in the defense through which he passed the ball into areas that allowed me to run it down and get clean shots on goal.”

Independence’s defense did the rest as the Blue Devils closed out the win.

“The defense did a good job of applying pressure and keeping shots to a minimum but we were just relying on some long balls and some outlets that just weren’t there,” MacRaild said. “In the second half, we sort of got the ball on the ground and started moving it around better and found a few more opportunities that turned into better shots on goal.”

Independence travels to Byers Field in Parma on Thursday to play Normandy.