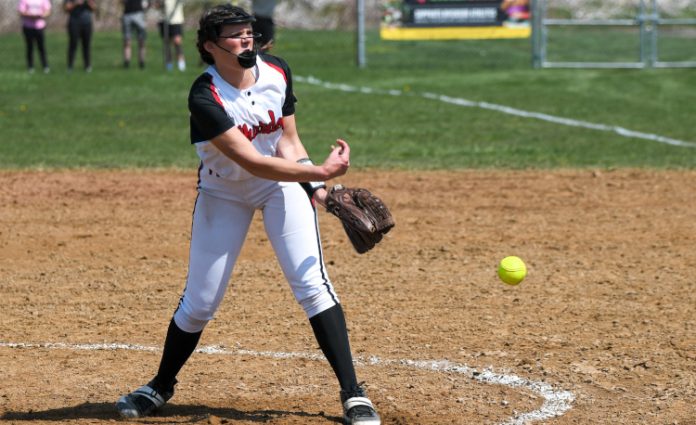 Sarah Sutton hit two doubles and a home run and Sydney Murray pitched a one-hitter in Chardon’s 11-0 six-inning win at Kenston on Thursday.

The win was bittersweet as the Hilltoppers were still reeling from the loss of Grace Legan, who suffered an injury that likely ended her season.

“It’s been tough,” said Chardon coach Stewart Landies. “The girls have been really kind of down in the dumps, so it was great to see them pick it back up. Scoring six runs the first time through the order, it was kind of like, ‘We’re here, we’re a team, and we’re going to do this, and here we go,’ so it was good from the standpoint that they needed to play and they needed to play well.”

Sidney Nagaj hit a one-out double in the top of the first inning to star the Hilltopper rally. Amy O’Brien walked and then Sutton hit the first of her two RBI doubles. Savannah Murray then tripled and Sydney Murray singled. Mackenzie Kilpeck then hit a two-run single to give the Hilltoppers an early 6-0 lead.

Kilpeck singled and scored on Nagaj’s second double of the game. O’Brien hit an RBI single and Sutton cleared the bases with her double.

“Sid Nagaj continues to mash the ball,” Landies said. “She had two more doubles and now has 11 on the year, which leads our team by far.”

Sutton then added her two-run homer in the sixth, which was set up by O’Brien’s two-out double.

“I was locked in ready to help my team,” Sutton said. “My last at-bat we had two outs and I wasn’t ready for the inning to end so I was looking for a base hit to keep the inning going.”

Sydney Murray made the most out of the early lead her teammates handed her.

She allowed just one hit and struck out four in the six-inning complete game.

“Syd pitched a one-hitter and she’s really been pitching well lately,” Landies said. “We’ve really been working on her mechanics.”

O’Brien and Sutton both finished with three hits and Nagaj, Madison Zombory, and Kilpeck each recorded two of Chardon’s 15 hits.

“It was good for us that game because it helps with our confidence for our next game,” Sutton said of the offensive output. “Once we got the first hit of the inning it got us all excited, which helped with our next at-bats to keep it going.”

Chardon improved to 11-8 overall and 5-2 in the Western Reserve Conference with five league games left on the schedule.

The Hilltoppers travel to NDCL on Saturday.