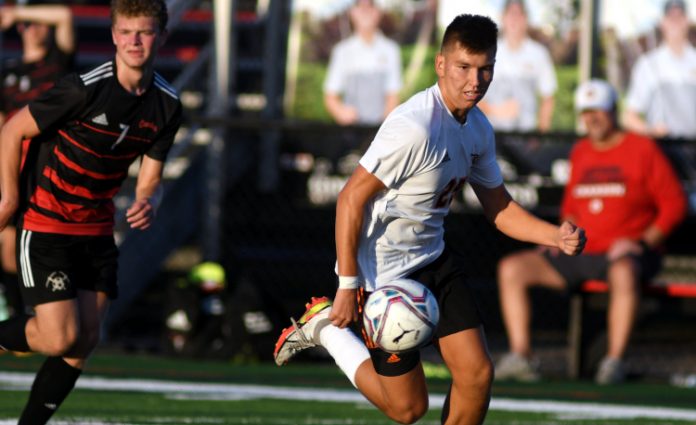 Dan Tadic scored a goal with eight seconds remaining in the game to lead North to a 3-2 non-conference win over Andrews-Osborne Academy on Thursday.

With the win, the Rangers improved to 5-4 and extended their winning streak to four straight games.

“It was a crazy, crazy finish,” Tadic said. “It was a very gritty game where we didn’t play our best, but I was really happy to be able to make a play for the team right at the end.”

Dominic Kustura gave the Rangers an early 1-0 lead when he scored his 12th goal of the season off an assist from Floyd Lomis.

Tadic assisted on Perchinske’s equalizer and then quickly scored the game-winner on a free kick.

“All three goals from the game came from set piece plays,” Tadic said. “We scored one with 30 seconds left and got a free kick at the halfway line right after that and I got put on it and I hit it in and it went straight in where the keeper really just completely missed the ball.”

North is now above .500 for the first time this season after starting the year 0-3.

After being outscored in their first three games, 10-0, the Rangers have outscored their last four opponents, 20-4.

“At first, we just weren’t clicking as a team with all the new players we have with me being one of them,” Tadic said. “After we lost to (University School) in a pretty bad game, it was a wakeup call for the whole team for sure and ever since then it’s been completely different.”

Rangers rebound with win over Euclid