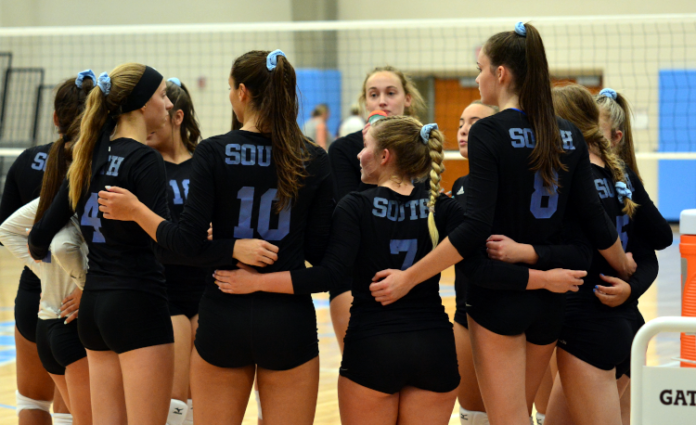 With nine seniors on the roster, the South volleyball team enters the 2020 season with plenty of talent and experience.

The Rebels do have to replace their libero from last season but with the leadership head coach Bill Behrend expects out of his upperclassmen, South is poised for a breakout campaign.

“We have a lot of seniors and that will lead to some great leaders,” Behrend said. “They have earned my complete trust and are pushing themselves and their teammates.”

Huff, a middle/outside hitter who already has committed to continue her career at the University of North Carolina-Wilmington, is one of the state’s top players. She was named honorable mention All-Ohio after leading the Rebels in every offensive category in 2019.

“We feed off of Margo’s play,” Behrend said. “Her ability to make things happen will set up the entire team and our energy.”

Suttell returns for her fourth year on the varsity and her second as the starting setter.

“She has paid her dues and is ready to take this team far this year,” Behrend said.

“She is possibly the smartest player on the team when it comes to volleyball,” Behrend said. “She really came into her own last year and we will rely heavily on her this year.”

Gambatese is a middle hitter and Jackam is a defensive specialist/opposite side hitter.

“Ahna has the potential to turn a game into our favor,” Behrend said. “Brie is such a consistent player. She can play front row or back row for us and brings something new to the game for us.”

Sophomore Sam Taraglia is also projected to start at setter or outside hitter.

“Sam played varsity last year for one day,” Behrend said. “It was the Mentor Power Tournament. She never flinched or wavered; we knew then that she was ready to play. She helped turn a match for us then and know she will do the same for us this year.”

Hall provides the Rebels with versatility as she can play outside, middle or opposite side and Siktberg is a defensive specialist.

“Carly is first off the bench in any situation to play every position. She is a very selfless person,” Behrend said. “Abbey has an energy on the floor that brings everyone up. Her enthusiasm and excitement about the game is so fun to watch. She is one of the most selfless players we have.”

Clarke and Morton both are defensive specialists.

“Izzy loves this game; you can see it with everything she does. Her love for the game gets contagious and brings everyone’s attitude to her same level,” Behrend said. “No one works harder than Skye. She has a blue-collar attitude that shows in everything she does from practice to games to mentoring.”

Juniors Cat Heckman and Sophia Jarc and sophomores Jada Colvin and Shaena Brooks-Kerestesy also are expected to contribute for the Rebels.

“Cat is in her second year as a varsity full-time player. When she gets healthy, she will open the offense up a lot more for us,” Behrend said. “Sophia does it all. She will play any position. She brings an amazing attitude, has run pregame announcements and, if it needs doing, Sophia will make sure it happens.”

Colvin is a middle/outside hitter and Brooks-Kerestesy will line up on the outside.

“This is Jada’s first year on varsity. When watching her play last year, we knew she had potential. She put in a lot of hard work in the offseason and had to earn a spot on varsity,” Behrend said. “Shaena brings a lot to the outside hitter position for us. She’s young but can bring the heat when she gets into her rhythm.”

While the pieces are in place for the Rebels to find success this season, the key to that success comes down to putting away teams when the opportunity arises.

“If we can finish, we will be good,” Behrend said. “When we get caught up with the score or who we are playing, we will struggle with finishing. But, if we focus on what we do well, we should be okay.”

Third time the charm for Chardon in win over South