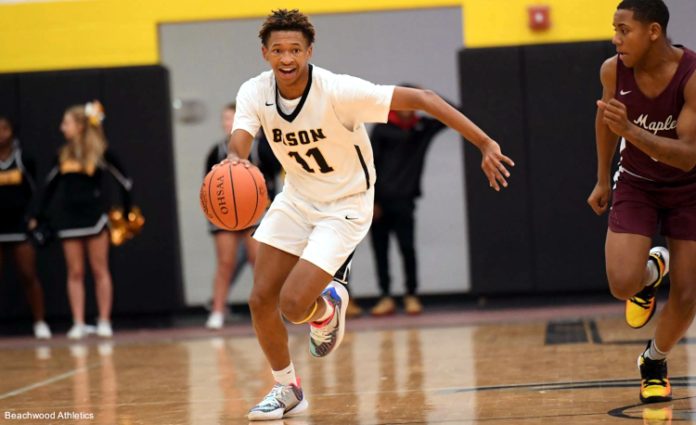 COVID has slowed down most area programs but Beachwood is confident it will be ready when the Bison can return to the court.

The Bison, who finished 15-9 overall and 10-3 in the Chagrin Valley Conference Chagrin Division, return just two starters and one other player with varsity experience this season but that’s a very talented trio second-year head coach David Krasnow has at his disposal.

“I am really excited about our team this year,” Krasnow said. “We are returning our top three players and leading scorers, which on a combined basis averaged over 50 points a game. While COVID-19 has presented some significant challenges, I am proud that the returning players have worked very hard in the offseason. All three of them are bigger, stronger, faster, better than they were last year. This makes us a better team.”

Houston, a 6-foot-1 guard, averaged 24 points, eight rebounds, four assists and four steals per contest last season on the way to being named MVP of the CVC, first-team all-district and second-team All-Ohio.

He enters his senior season needing just 66 points to reach the 1,000-point milestone.

“Daryl is flat-out an elite player,” Krasnow said. “Other than 3-point shooting and free throw percentage, Daryl led the team in every category. Daryl is a gym-rat and as good as he was last year, he is better. Daryl is hungry for his senior year. I believe Daryl will have a better season than last and has more weapons around him, which he is excited about. Daryl was listed as one of the Top 50 players in the area, which he deserved. I believe Daryl is a sleeper for Mr. Ohio is how good he is.”

Jones, a 5-foot-10 guard, averaged 13 points per game while shooting 40-percent from behind the arc and 80-percent at the free throw line. He was named second-team All-CVC last winter.

“Moe was a great story last year,” Krasnow said. “He had never played a varsity minute and ended up earning all-conference honors. Moe is all about hard work and determination. We are once again looking for big things from Moe. He had a great offseason and we are looking for what he can bring to the table.”

Minter, a 5-foot-9 guard, scored 15 points per game with six rebounds and four assists as a sophomore. He also was named second-team All-CVC.

“Jalen is a phenomenal athlete,” Krasnow said. “He was the starting quarterback for our football team and in his first year as the starting QB, took the team on a deep playoff run. While Jalen is a very talented player, he is an amazing team leader. He has a charisma to him that makes his teammates want to follow him. He has matured off the court in the last year and seems like he is 10 years older. Jalen is going to be our ‘QB’ in basketball, asked to lead this very talented group of players.”

Jones, a 6-foot-2 guard/forward, has a very high ceiling.

“Joshua is an elite talent that is about to be unleashed,” Krasnow said. “He is equal parts power in that when he goes to the basket, he is virtually unstoppable and has finesse with his shot and touch. In addition, he is a great passer and a real leader on the floor. He is going to be a force for us.”

Kirks, a 6-foot-5 forward, brings some size and versatility to the floor.

“Watch out,” Krasnow said. “The CVC as well as high school basketball is going to know about this young man very shortly. He is strong and loves to bang around inside but can also shoot the 3-pointer and is great with both hands.”

The Bison have plenty of talent set to come off the bench this winter.

Freshman Desmond Kirks is another player Krasnow expects to make some noise this winter.

The 6-foot-3 guard/forward and younger brother of Dominic Kirks, also has the potential to be a game-changer.

“While this will seem like I am duplicating what I just said for his brother, but watch out,” Krasnow said. “The CVC, as well as high school basketball, is going to know about this young man very shortly. He is ultra-competitive, a slasher as well as a knockdown 3-point shooter. This young man is something.”

Jackson is a 6-foot-2 forward who averaged eight points and six rebounds per game last season. Bland is a 6-foot-4 guard/forward and Lurie is a 5-foot-10 guard.

“Dalanti is tall, long and athletic. He may be our best defender and is another ‘high motor’ guy. He plays hard, is selfless and we are expecting big things from Dalanti this year. Anthony is a great player to have on the team. He always has a smile on his face and is the team comedian. From a playing standpoint, he reminds me of Kevin Love. He can go inside but is also deadly from the 3. He will play big important minutes for us this year. Nathan had as good, if not a better, offseason than anyone on the program. He has elevated his play, not only as a varsity player but as a rotational player and possible starter. He is a scorer who is quick, shifty and can knock down the open shot. Nathan has a bright future at Beachwood.”

Beachwood’s “Big 3” should keep the Bison in the hunt for the CVC title this season but opposing teams have a handful of other players to game plan against.

It’s that depth that Krasnow is most excited about.

“In addition to the returning players, we have three new elite players in the program,” Krasnow said. “Sophomore Joshua Jones missed last season with a knee issue and is returning to form. Josh reminds me of James Harden and is a playmaker. I am excited to see Josh on the court. In addition to Josh, we are excited about the Kirks’ twins, Desmond and Dominic. Desmond is a 6-3 lefty who is a long, fast, aggressive player with a very high motor. Dominic is 6-5 and reminds me of Draymond Green. He can handle the ball, shoot 3s or take you inside. He is a big strong fearless young man.”

Krasnow’s game plan includes playing an aggressive style of defense while allowing his players to use their strengths on the offensive end.

“Our emphasis this season is going to be on defense and putting pressure on our opponents,” Krasnow said. “I believe scoring points will not be a problem for our team, but for us to achieve our team goals, we need to take pride in playing defense and work hard to be an elite defensive team. I do not want to give our secrets away, but we have a few tricks up our sleeves for what we will do defensively.”

Beachwood’s goals include unseating Chagrin Falls at the top of the CVC Chagrin Division standings and also making a deep run through the postseason.

A trip to Columbus would be a dream come true.

COVID certainly hasn’t helped the Bison but Krasnow is confident his team will be up for the challenge when play resumes.

“Our greatest talent is going to be bringing these players together as a unit in a very short time frame,” he said. “In one of our early workouts before basketball activities were halted, I was talking to arguably the top nine players in the program and I asked them, ‘Who here has been the top or go-to player on their AAU or whatever team they have played on?’ Eight of the nine hands went up. I am not worried about our talent or ability to score the ball. I need everyone to be open to accept whatever role they are put in for the program to succeed. I need these young men to play for each other and for Beachwood basketball. If we do that, we will be tough to beat.”

Balanced Dragons ready to tee it up

Harvey has questions to answer