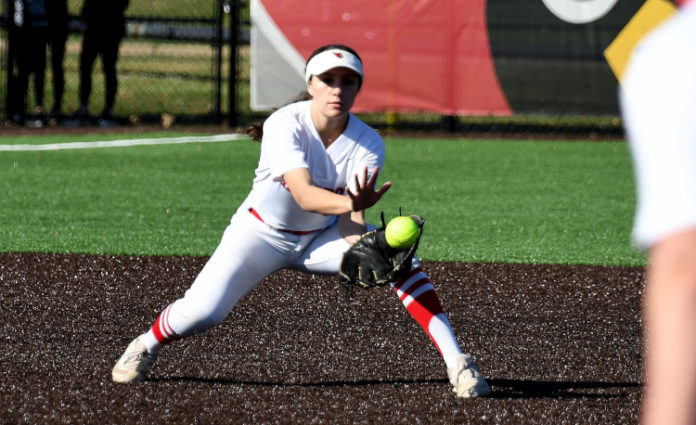 There’s a lot of excitement surrounding the Mentor softball program this spring.

A new coach, a new stadium, and plenty of new faces in the lineup leave some yet unanswered questions, but the expectations are high for the program.

“I have high expectations for any team I coach,” said first-year skipper Jo Bondra. “We are only returning three starters from the 2019 season, but we have added a lot of talent and are expecting to compete in each game we play.”

Mentor finished the 2019 season with a 16-5 record overall and a 9-4 mark in the Greater Cleveland Conference.

With just three returning starters, the Cardinals will welcome several new players into the starting lineup.

One of Bondra’s biggest challenges has been filling that lineup.

“When I came into tryouts, we had nine pitchers, most of who would play varsity at any other school in the area,” she said. “That has been our biggest challenge, getting young players pitching time who have varsity level talent.”

Junior captain Leah Temple will throw most of the innings this spring. She opened the season on Saturday with a 12 strikeout performance in a 5-4 win over NDCL.

“Leah works extremely hard to perfect her craft,” Bondra said. “She has goals this year that she has had her eye on since day one. Every day at practice, she comes and works hard. We have her throwing three times a week and she will ask me to throw more. She is a dedicated pitcher who wants her team to be at the top. I have high expectations for her, but she has higher expectations for herself.”

Junior Kiley Markowski, one of the team’s captains, is the quarterback of the infield at third base.

“Kiley is another player who has high expectations for this team,” Bondra said. “She is one of our captains and is a natural leader. Kiley is an offensive threat and brings an awesome energy to the team.”

Juniors Sydni Bush and Bella Carcioppolo will catch and play shortstop, respectively, while sophomore Abby Haydu is at first base and freshman Izzy Coode will start at second.

Seniors Allie Loparo and Adrianna Sluga are projected to start in left and center field, respectively, and Siedler will play right when she’s not pitching.

Sluga, a tri-captain, already has committed to Lake Erie College.

“She has taken some of these younger outfielders under her wing and shown them the type of effort you need to put in to get to where you want to be,” Bondra said of Sluga. “She is the type of kid that you want on your team, a good leader, hard worker, and always doing what’s best for the team. We moved her to center field from shortstop and she hasn’t missed a beat. I’m excited to see what she does in her senior year.”

Senior Jill Reardon will provide a consistent bat in the lineup.