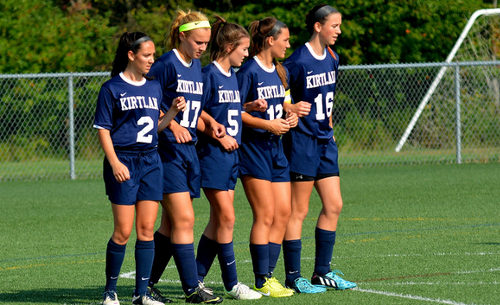 A bump up to the Chagrin Valley Conference Chagrin Division has forced the Kirtland girls’ soccer team to adapt to a new level of competition.

So far so good as Thursday’s 1-0 win over Orange improved the Hornets’ record to 3-1 overall and 2-1 in conference play.

The Hornet scored just one goal and it didn’t come easily.

Orange packed their players into the back end of the field, which limited the Hornets’ scoring opportunities.

“Going into it I thought we were the better team but I would have liked to generate a few more goals than a 1-0 score,” Bradac said. “They really do get 10-11 girls behind the ball at any time. They would just clear the ball and not come out. It was frustrating I think for our girls to try to find a way to score.”

The Lions had just one scoring opportunity in the first half but were denied by Kirtland keeper Maddie Zuberer, who finished the game with three saves.

Kirtland finally broke through early in the second half.

“Within the first five minutes of the second half Hannah Vouk hit a beautiful cross into the middle and Katie Straus buried it into the back of the net,” Bradac said. “It was a goal that was driven out of work. She basically took about a 30 yard run off the ball and scored from about the top of the box. The ball came across and she was by herself. She was composed and with a great deal of finesse she put the ball into the back of the net.”

As always, Kirtland’s defense made it difficult for the Lions to get near Zuberer.

“The three in the back and (Zuberer), we take her for granted, which we shouldn’t because she does so many good things for us,” Bradac said. “Emily Kadas played a great game playing center back for us and Hallie Ward and Claire Neibecker played well. I never felt we were in danger of giving up a goal.”

Kirtland hosts Wickliffe on Tuesday and West Geauga on Thursday then travels to SPIRE Academy on Saturday to play Geneva.