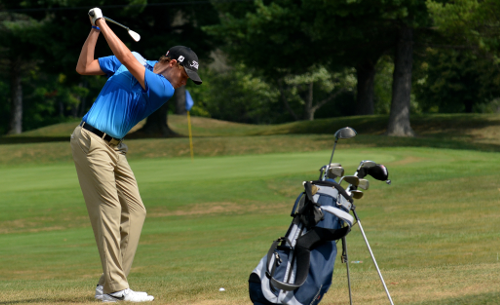 Led by Andrew Teribery, who shot a lifetime low 36, Independence posted the top four scores in a 166-220 win over Harvey at Seneca Golf Course.

Teribery has steadily improved this season and his match-low score was the result of focused play.

“He’s been improving throughout the year and he’s been really striking the ball well,” said Independence coach Mark Echstenkamper. “I watched him play a lot today. He was in the fairway, his short irons were good. His putting was good. He really had a great round.”

Tyler Wilson shot a 38 and Nick Brunsman came in with a 41 for the Blue Devils.

“That was a little bit above average for both of them,” Echstenkamper said. “They didn’t have their best rounds but it was still pretty good.”

Joe Rydzinski finished fourth with a 42.

“He played really well too,” Echstenkamper said. “He and Teriberry played in the same group. Ironically, they were playing as our 5 and 6 tonight and they brought in some really good scores. He’s been having a good year. He keeps the ball in the fairway, he stays out of trouble and he doesn’t try to do too much. He scored pretty well.”

After shooting 155 in a win over Brooklyn earlier this week the Blue Devils have now scored 160 or lower in back-to-back matches.

That’s the type of progress Echstenkamper wants to see as the team heads toward the postseason.

“Playing 18 holes is a lot different than playing 9 (in a dual match),” Echstenkamper said. “We were playing on a course we’re familiar with. Pine Hills, where we play our sectional, we’ve got to get out and practice to see what they can do on 18 holes. We have some guys playing for positions for the sectional tournament so we’re going to have to have a couple of playoffs to see who will play in sectionals.”