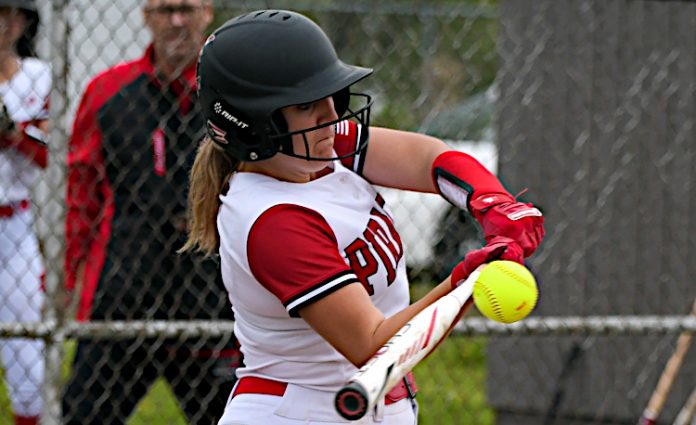 Perry scheduled Wednesday’s non-conference game against Nordonia to prepare for its sectional final at Aurora on Thursday.

The Pirates got a lot more than they bargained for when Rosalyn Tharp hit a walk-off single in the bottom of the eighth inning to beat the Knights, 2-1.

“It was awesome,” said Perry coach Joe Medlen. “Our plan was to go in and work on the little things like bunt and run, hit and run, stealing in different situations, and that’s exactly what we used this game for. Their pitcher was good and kind of changed that all up but our girls kept battling.”

Nordonia strung together a single and an RBI double to take a 1-0 lead in the top of the first inning.

The Pirates had a batter reach base in each of the first four innings but it wasn’t until the fifth that they threatened to score.

Faith Hartman reached on an error with one out and then Madeline Infalvi and Elise Strahan both singled to load the bases but a base-running error ended the inning.

“We overcame some big mistakes that hopefully don’t show themselves (against Aurora),” Medlen said. “We had three huge base running errors and a couple of lineouts that we shouldn’t have gotten doubled up on. We had some uncharacteristic errors on infield popups for some reason. The best thing about a game like this is it taught us to overcome adversity and come out with the win.”

Gigi Vicini tied the game with a solo home run to center in the bottom of the sixth inning.

“I was telling myself to relax and just get a base hit for my team because my at-bat before was a strikeout and I had to get that out of my head,” Vicini said. “I just saw a high pitch so I took a swing at it because I love them. It honestly just felt like a good hit to center so when I saw it going over the fence as I rounded first I was extremely happy.”

Hartman, who allowed one earned run on eight hits and struck out four in a complete-game victory, retired the Knights in order in the top of the eighth to set up Tharp’s big hit.

Infalvi set the stage with her leadoff bunt single and Strahan turned a sacrifice bunt into a single to put runners on first and second with no outs.

Vicini grounded into a fielder’s choice to move both runners into scoring position and Calli Thompson hit a short fly ball to right. She reached base safely but the runners were forced to hold their bags.

Lilly Agostine then lined out to left but again, the runners were forced to hold their positions.

“Knowing the winning run was on base when I was at bat, I knew I had to be aggressive and swing for a base hit,” Tharp said. “In my mind, I thought of it as a two-strike approach where I shouldn’t be swinging for the fences and more as a single in the gaps.”

She saw what she wanted in the first pitch and hit it into center field to end the game.

“Hitting the walk-off run to win the game felt very good, especially because it’s the day before our sectional final playoff game and I know I will go up to bat tomorrow with more confidence,” she said.

Infalvi, Strahan, and Vicini each finished the game with two hits. Thompson, Agostine, Tharp, and Emma Pietrzak each recorded one hit in the win.

“Their pitcher was great,” Medlen said. “She was really, really good. She was a hard-thrower and threw drop balls and exactly what the pitchers throw from Aurora, so that should really help us.”

With the win, Perry improved to 17-7 and will play at Aurora on Thursday for a sectional title.