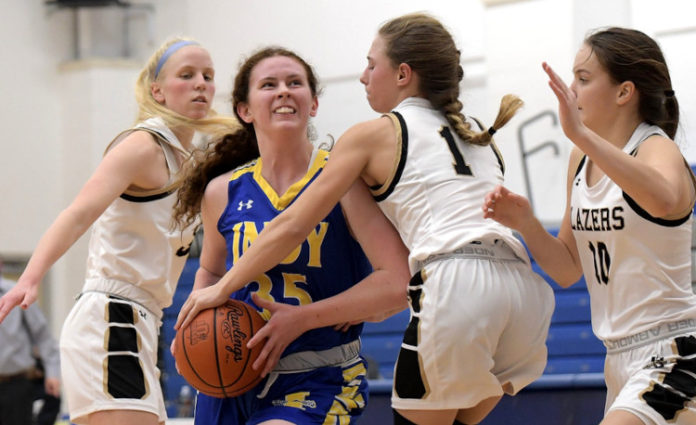 With the win, the Blazers improved to 4-1 on the year and now have more wins this season than the team reached in any of the past three seasons.

“That’s a team that has won 20 games the last couple of years and won their conference the last two years,” said Hathaway Brown coach Brandon Stewart of the Blue Devils. “They’re where we want to be. Coming out and making a statement like that is huge for our team. We haven’t won more than four games in a really long time and our seniors have never won four games. This was their fourth win today so that’s big, especially to bounce back after the Revere game.”

The Blazers got off to a fast start as they built an 11-2 lead early in the first quarter and led by seven points heading into the second.

Independence rallied back in the second and outscored Hathaway Brown in the period, 19-14, but still trailed at halftime, 25-23.

Stewart made some key halftime adjustments and his players responded by outscoring Independence in the third quarter, 23-7.

“The third quarter was huge,” Stewart said. “We knew our defense had to be good and if we could play at that pace and use our defense to create our offense then we’d be in a good spot. They were doing a great job offensively. They have a lot of size but our defense really picked it up in that third quarter and that changed the game.”

Independence dropped to 4-1 after slow starts in the first and third quarters forced the team to play from behind all night.

“We just flat out got outworked,” Independence coach Mike Marcinko said. “They went harder in a four-foot box than we did. That’s what happened early and then we clawed our way back by playing hard and making good decisions but then fell back in the same mode again in the third quarter and got behind. Now you’re chasing your tail and gambling, so you’re either going to give up layups or get steals. If you don’t get the steals, it ends up going from a nine-point game to a 20-point game.”

Hathaway Brown was in a similar position early as the Blazers forced steal after steal but struggled to finish.

“We were settling for jump shots early and got away from attacking the rim,” Stewart said. “They were sagging off of us a lot and giving us those jump shots and we took them. Once we realized that even with the defense sagging off us a little bit we could still attack and get layups, that helped us a lot and we started knocking down some jump shots. We like to work inside out.”

Freshman Gia Piscitelli led the Blazers with a 15-point effort. Sophomore Tegan Clark also scored in double figures as she contributed to the win with 12 points. Senior Bridget Kennedy and sophomore Jermani Jones both added six.

The Blazers outrebounded the Blue Devils, 42-34, and recorded 15 steals compared to just four for Independence.

Despite the loss, Independence gained valuable feedback that Marcinko hopes helps the team to make the necessary adjustments heading into the second half of the season.

“That’s why we played this schedule. We want to play teams like Hathaway Brown,” Marcinko said. “We want to play teams where we’re reaching up to teams that are either bigger schools or perceived to have more talent than we do. That’s why we wanted to play this game. The sad thing is we didn’t really compete as well as we wanted to but film-wise, but this is going to be a great film to tear apart with the kids, and not in a negative way, but here’s where we want to be and we didn’t get to that point. Based on what we’re watching, what do we have to do individually and collectively to hone in on our goals and the way we want to play every game.”