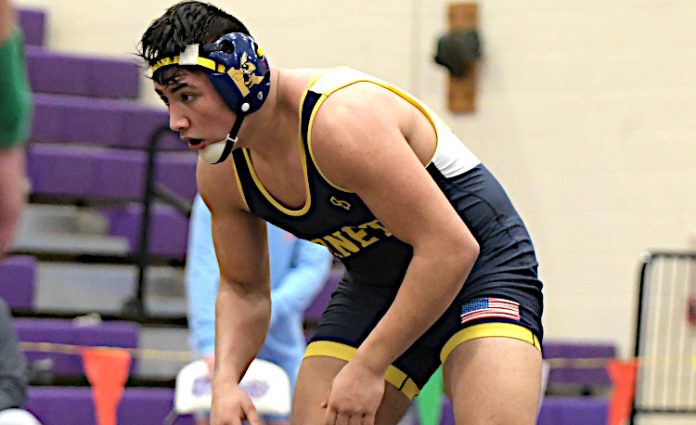 Three Kirtland wrestlers won individual titles and two other Hornets placed among the top six at the Al Pinter Memorial Tournament in Cuyahoga Heights on Saturday.

Senior Will Davidson won the 132-pound weight class while junior Louka Babic and senior Brennon Braud won at 165 and 215, respectively.

“I was happy with my performance this weekend,” Davidson said. “It allowed me to adjust back into wrestling and helped me notice what I need to work on.”

Davidson opened pool wrestling with an 18-3 technical fall and then won his next two matches by default. He then pinned his way into the championship match where he defeated North Ridgeville’s Zach Orseno, 5-0, to win the title.

“The key for me is doing what I always do, trusting what my coaches tell and pushing the pace,” said Davidson of his championship match win.

Babic went 4-0 in pool wrestling with four pins, including two in less than a minute, and he closed out the day with a 51-second pin over Waynedale’s Liam Mitten in the championship match.

“I was very satisfied with my performance today,” Babic said. “Going into the tournament, I felt confident enough to challenge for first however, I did not expect to pin all five matches.”

Despite his success, Babic was focused only on doing what he needed to in order to win as many matches as possible and to earn a spot on the podium.

“I just took each match as it came,” he said. “Pinning wasn’t my goal at all. It was just to win, place high, and have fun. Fortunately, the pin was there for every match, so I made sure to capitalize off of it.”

Braud also pinned all four of his pool wrestling opponents.

Braud finished his day with a 5-2 win over North Ridgeville’s Tyler Duff.

“It took a lot of heart to win that last match in the championship, especially since my cardio isn’t really there right now and I was up a weight,” he said. “Those are the kind of matches I’m going to have to win if I want to excel during the postseason.”

The Hornets finished in fifth place as a team.