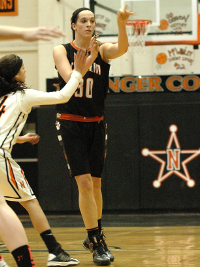 Chagrin Falls lost one of its best players and suffered through several other setbacks in 2013-2014, but the Tigers still finished undefeated in the Chagrin Valley Conference Chagrin Division and won a district title.

With five returning starters—including a pair of Division I signees—the Tigers have their sights set on another conference title and a deeper run in the post-season.

“As a team, we want to keep the united front we had last season through all the adversity we faced,” said Chagrin Falls head coach Brittany Anderson, who is 61-33 in her first four seasons. “Expectations are high. We want to stay at the top of the CVC and make a deep run into the postseason, but we need to stay true to ourselves and work through the season game by game.”

Two all-conference performers, Amy Dishong and Jessie Tull, have graduated but the Tigers return plenty of talent and experience.

Owen, a 5-foot-2 guard, averaged 2.7 points, 1.3 assists and 1.2 rebounds per game last season on her way to earning honorable mention all-CVC honors. She is quick and plays hard-nosed and disciplined on defense. Owen also is a standout on the Chagrin Falls lacrosse team. She earned All-American honors last season.

“(She’s a) tough player who can shoot outside and post up inside,” Anderson said.

Hallie Thome suffered a season-ending knee injury last season. She averaged 19.8 points, 9.8 rebound, 2.7 blocks and 1.3 steals per game. Last week she signed a National Letter of Intent to continue her education and playing career at Michigan.

“Hallie has a tremendous work ethic and is playing stronger than ever,” Anderson said. “She runs the floor well, has a soft touch on her shot, in the paint and from outside, and has great court vision.”

Hazleton, a 5-foot-6 guard, played in 18 games last season and should provide the Tigers with a reliable shot from outside the arc.

“Sarah is a leader on the floor and off,” Anderson said. “She will really help us with her outside shot.”

In addition to their returning starters, the Tigers have five other returning letter winners.

Kelly Dishong, a 5-foot-7 junior guard, averaged 4.6 points and 3.0 rebounds per game last season. She worked hard in the off-season to improve on her already stingy defense and finishing better at the hoop.

“Kelly has really stepped up her game over the last season,” Anderson said. “She put in a lot of time this summer to improve every aspect of her game.”

Brianna Baker, a 5-foot-9 junior forward, and Madi Deignan, a 5-foot-7 junior guard, both have varsity experience and should prove useful to the Tigers this season. Baker also plays soccer for the Tigers.

“(Briana) is an athletic, quick forward, a solid rebounder. She will be relied on to be a defensive stopper in the post and scorer on the offensive glass,” Anderson said. “Madi is another outstanding shooter with a quick release. She will make it difficult for teams to help inside and recover to the wing.”

Maggie Clemens, a 5-foot-11 junior forward, stepped in to fill Hallie Thome’s shoes last season and again will be counted on to be a presence in the paint.

A veteran roster filled with size and talent should keep the Tigers in contention to achieve their goals.

It’s up to the Tigers to remain focused.

“We need to stay healthy this season and step up in pressure situations,” Anderson said. “We have veteran players now and everyone needs to take care of business in big games.”