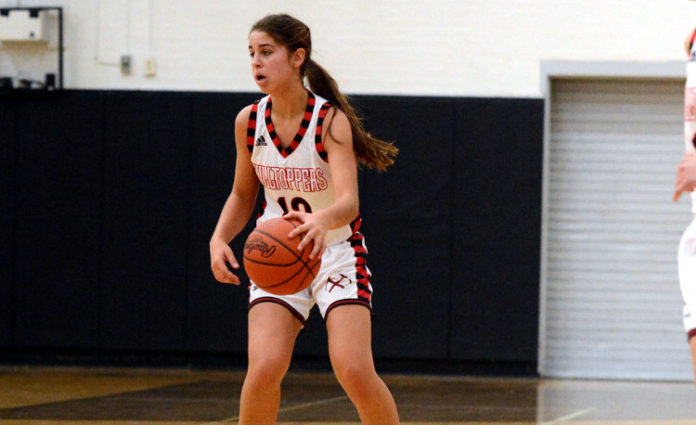 Emily Noerr scored a game-high 24 points in just three quarters to lead Chardon to a 68-47 non-conference win over visiting Cleveland Heights on Thursday.

With the win, the Hilltoppers improved to 3-2 on the year.

“We moved the ball, we shared the ball on offense, we finished possessions with defensive rebounds, and we had nine kids score tonight,” said Chardon coach Cullen Harris. “We played really unselfish and attacked the rim and didn’t settle. That’s ultimately what’s going to make us successful down the road. Overall, it was a top to bottom team win.”

Chardon led 19-12 after the first quarter and continued to pull away from the Tigers in the second. The Hilltoppers led at halftime, 35-22.

That’s when Noerr capitalized on Chardon’s defensive intensity and scored on four straight transition baskets to push the lead to 43-22.

“We were turning them over at will after halftime and we got runout layups,” Harris said. “To her credit, Emily went on an 8-0 run to start the first 90 seconds of the second quarter. In the huddle, she said, ‘That’s all you guys, you’re making the plays and I’m just running the lanes.’ She was trying to give them credit for it, which is great for a young kid to recognize that it’s us; it’s not me. That was just great to hear, that perspective, and it’s a testament to the type of players she’s becoming.”

Noerr anchored an offense that thrived on big plays on the other end of the court.

“It all started with my teammates’ great defense and steals,” Noerr said. “I mostly just leaked out and got a bucket out of their steal. As a team, we moved the ball in and out well and we’re able to see the court well, which was a huge key.”

On Tuesday, Noerr scored 14 points in Chardon’s 66-57 win at Hathaway Brown in the Hilltoppers’ first game back after a three-week layoff.

Noerr said she and her teammates used that break as motivation in their first back-to-back games of the season.

“After a couple of weeks off, I think we came back and really dialed in,” she said. “Knowing not too many schools are able to be back in games, I think we all feel really fortunate and are making the most of this opportunity to be able to play games.”

After Noerr’s run, Sam Liechty and the rest of the Toppers finished off the Tigers in the third quarter to take a 56-34 lead into the fourth.

Liechty, who finished with 12 points, and the rest of the stars sat out the fourth quarter.

“What I liked, in the fourth quarter,” Harris said. “We had some younger kids in, some JV kids, and some seniors whose minutes aren’t at the starter level, and the quarter was 13-12, so those kids went out there and held their own and did the little things and finished possessions.”

“Playing two quality opponents coming out of that break and playing the way we have, I’m happy with where we are but I know we have a ways to go,” Harris said. “Sammy had her usual solid night with 12 points in three quarters. She does a little bit of everything for us. She scored our first eight points and then they had to kind of patch things in on her, but it was a balanced team effort. We have some guards who didn’t score their average but they were perfectly content with facilitating and getting the open kids shots and that’s what makes us dangerous is when we can play together, share the ball and move the ball, then five kids can score in double figures. That’s tough to beat.”

Chardon travels to Louisville on Saturday.

Chardon runs to win at Riverside

Chardon bounces back with win at Mayfield