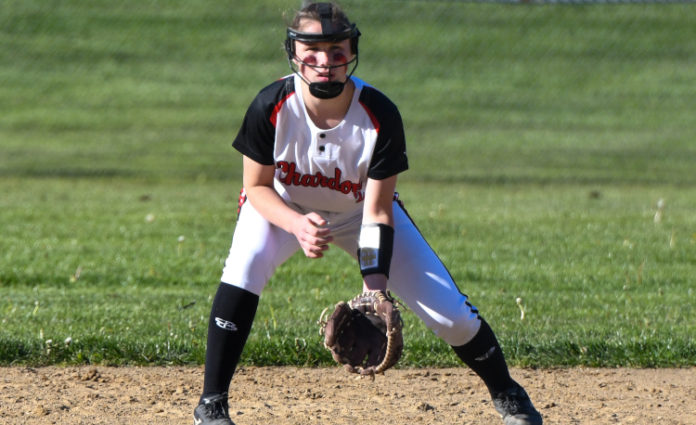 Chardon honored its senior class prior to Thursday’s conference showdown with visiting Mayfield.

The Hilltoppers then hit the dirt and celebrated with a 12-0 win over the Wildcats.

“This senior class has set the example for years to come of how to treat underclassmen so that the team can function as a true team,” said Chardon coach Stewart Landies. “In our area, there are so many talented softball players and tough teams. When you go up against an equally talented team the difference, I think, is having kids that genuinely care for each other. This is probably the most talented team top to bottom that I have ever coached, but the difference is how cohesive they are and how much they genuinely care for each other. Without senior leadership, that doesn’t happen.”

Chardon scored three runs on two outs in the bottom of the first and added five more in the second. One run in the third and three in the fourth allowed the Hilltoppers to end the game in five innings.

“It was a super emotional day for a lot of us,” said senior Lindsey Leggett. “It was very exciting. Before the game, we were all having a lot of fun, then we got focused and played the game we knew how to.”

Leggett finished the game 1-for-3 with two runs scored and an RBI in leading the Hilltoppers to a 17-5 record overall and a 10-2 mark in Western Reserve Conference play.

With the win, the Hilltoppers need just two more wins to clinch their first league title in history.

“It’s been so special because this group of girls is so much fun to play with and to be around,” Leggett said of the run to the title. “I think of them as my sisters and not as my teammates.”

Senior Kayla Noerr recorded just one hit in two at-bats but it was a big one as she hit a two-run homer in the fourth and finished the day with three RBI. She also allowed just one hit in a five-inning shutout and struck out nine.

Her battery-mate and classmate, Madison Russo went 0-for-3 behind the plate but she has contributed to Chardon’s run this season and was pleased to see her teammates rally around her.

“It felt great to keep the momentum going and come out with a great team win,” she said. “It was definitely bittersweet, especially because it’ll be our–the seniors–last time playing on that field. This team has unmatchable chemistry. Also, we are truly blessed to have the coaching staff we have.”

Senior Audrey Manary contributed to the win with a hit and an RBI.

Toppers regroup in win over Riverside