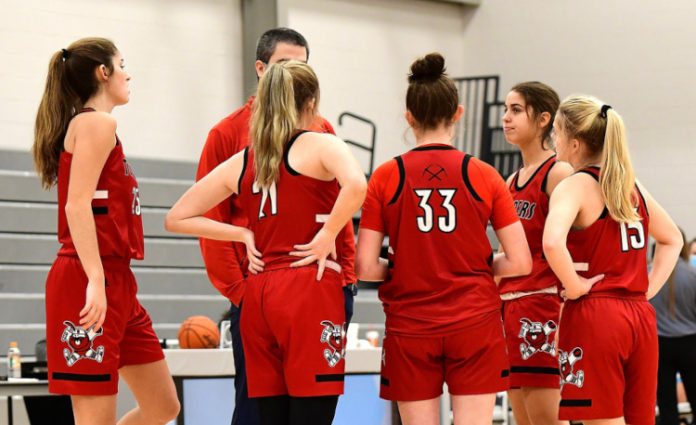 Chardon tipped off Wednesday’s league showdown at Mayfield with a fast start and went on to beat the Wildcats, 53-42.

With the win, the Hilltoppers increased their winning streak to five straight games, all within the last eight days.

“We got off to a good start with patience on offense and some good shooting from the outside,” said Chardon coach Cullen Harris. “With this being the third game in three nights, we challenged them to start strong with energy and effort and build the lead so we can be free with subs.”

Chardon’s hot streak started after a humbling loss at Madison on Jan. 23.

Since then, the Hilltoppers defeated defending Western Reserve Conference champion North, who has played in back-to-back regional tournaments, Riverside, Perry, who was 16-1 and a two-time regional tournament participant, Cuyahoga Falls and now Mayfield.

Each of those wins has occurred in an eight-day span.

“The kids are resilient,” Harris said. “They’re used to playing AAU where they play five games in two days, so they’re handling it well. While being mindful of our legs and endurance, we’ve been trying to spread playing time amongst more kids and keep shifts shorter. Beyond the physical toll, the mental toll is probably harder. I know I’m exhausted and I haven’t played a second. I have faith and believe in this group of kids they’ll be able to step up and bring the energy tomorrow.”

Chardon’s scoring by committee approach has been one key to its recent success.

“I’m happy with how we’re responding to a variety of challenges,” Harris said. “We’ve been mixing lineups and rotations as well as defenses and what looks were working on the offensive end. They’ve answered the bell and I anticipate they’ll keep the train rolling with a great effort tomorrow (at Walsh Jesuit).

Chardon opened the game on a 16-4 run, which helped the Toppers to set the tone for the remainder of the game.

Mayfield responded and played Chardon nearly even the rest of the way.

“Credit to Chardon, they came out more intense and set the tone early,” said Mayfield coach Ryan Looman. “It really boiled down to effort and execution on our end. We knew they’ve been playing some really good basketball and Coach Harris has them humming along at the right time. We couldn’t afford to come out flat or lack intensity in anyway and unfortunately, that’s what happened. That lack of focus took us down the wrong path to start.”

Uriah Jennings and Hannah Peterson both scored in double figures for Mayfield with 14 and 10 points, respectively. Ashley Dearden added eight for the Wildcats.

Peterson recorded a double-double as she also grabbed a team-high 13 rebounds.

“I thought once we settled down and got back to our keys for the game we were OK,” Looman said. “We got back to trying to attack the rim and had some solid communication and hustle defensively. We had some chances to get there, had it at two possessions it under a few times, but Chardon kept responding. I was happy with how our girls kept pushing and didn’t back down after that first. We had some stretches where we played some good basketball; we just have to put it all together.”

Mayfield cruises to win over Hudson

Rangers run to win at Chardon