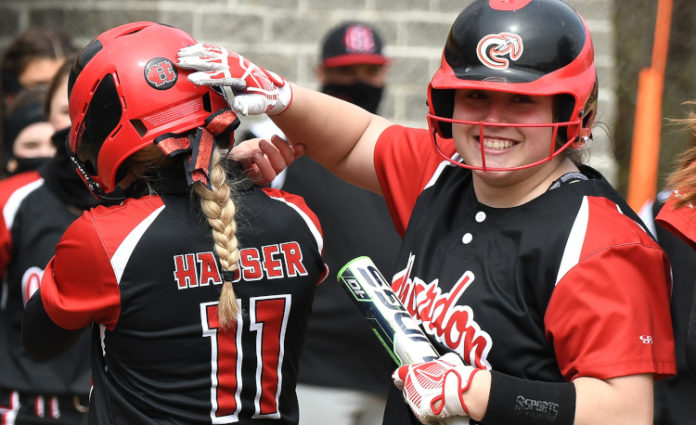 It was only natural for Chardon to add an exclamation point to its first conference title in school history.

The Hilltoppers needed nine innings to beat host Mayfield on Wednesday, 4-2, to clinch at least a share of the Western Reserve Conference title. Chardon can win it outright with a Madison win over Riverside on Thursday.

“It was tough to come off the (postseason) loss on Monday because their hopes were so high and their expectations were so high,” said Chardon coach Stewart Landies. “My biggest fear coming into today was that there would be a letdown. We were flat coming out but the kids battled back and I just couldn’t be happier for them. They’re a great group of kids and this senior class earned it.”

Chardon transitioned to fastpitch in 1992, the year most of the Hilltoppers seniors were born, so this league championship is long overdue.

Sarah Sutton opened the game with a solo home run but Mayfield pitcher Lindsey Urban wouldn’t allow another run until the sixth inning.

Urban issued two walks and allowed four hits over the course of the next four frames.

It wasn’t until the sixth that Chardon added an insurance run.

Madison Russo hit a one-out double and Audrey Manary came up with a clutch two-out triple to push Chardon’s lead to 2-0.

“I’m so happy for Audrey Manary,” Landies said. “It’s odd to have a girl with three home runs as a bench player but Audrey was and she served her role all season long and did it with class. Today, she got the call and stepped up, and delivered big time.”

Manary’s insurance RBI proved valuable as Mayfield scored two runs in the top of the seventh to force extra innings.

Brynn Gillen reached on an error with one out and Urban followed with a two-run homer to left.

Russo singled in the eighth but the Wildcats turned a double play to end that threat.

Mayfield’s Ashley Dearden drew a one-out walk in the bottom of the eighth but was thrown out at third trying to advance on a single by Emily Graves.

Manary delivered again as she doubled to start the Chardon ninth.

“It is so exciting and such an honor to be a part of the first team to win a conference title for Chardon,” Manary said. “We worked extremely hard in the offseason and I think today’s game showed how much we put in. Going nine innings, I think that our offseason work paid off. We know what we had this year was special and I’m so happy we were able to finish with the title.”

Manary finished the game 2-for-3 with a double and a triple.

She stepped into the batter’s box in the top of the ninth fully confident that she’d get on base.

“I was nervous but also confident,” she said. “Coach Tosti told me to take a deep breath and relax and that’s what I was able to do. I knew that if I got on base my girls would be able to get me in and they did.”

Manary moved to second on a passed ball but the Wildcats retired the next two batters. Grace Legan then singled to give Chardon a 3-2 lead and Sutton followed with an RBI double to close out the scoring.

Kayla Noerr struck out the first two Wildcats she faced in the bottom half of the inning and the Hilltoppers recorded a groundout to seal their conference title.

Noerr allowed one earned run on five hits and struck out a season-high 17 in the win.

Sutton and Russo both finished the game 3-for-4 at the plate while Manary and Amy O’Brien both had two hits.

The Hilltoppers finished the season 19-6 overall and 12-2 in the WRC.

Chardon cruises to win over Madison