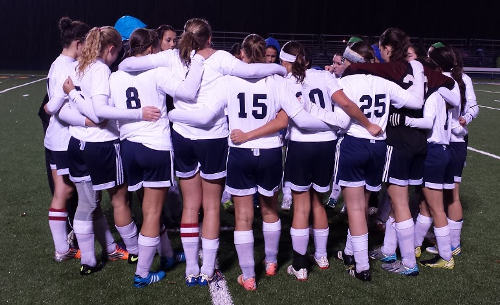 “I told the girls before the game whoever made the fewer mistakes would win,” said Independence head coach Bryan Less. “Each goal was created by our own mistakes. We had a couple people dive in and miss tackles when I tell them not to do that. That led to two goals.”

A missed pass in the midfield led to Trinity’s first score when a Trojan broke free and went one-on-one with Independence keeper Krista DeFini with 16:10 left in the first half.

The Trojans made it 2-0 two minutes later when they banked in a shot that hit off the post.

Trinity later scored off a direct kick in the 31st minute.

“That third goal, I thought our sweeper, Marissa Artrip, made a good play,” Less said. “I thought that was a borderline call. I thought it was all ball, but even that was created by a mistake in the middle.”

“Today’s result was created by us,” Less said. “We couldn’t control the ball. We didn’t have a great first touch. That’s what happens. I teach them to possess the ball and when they don’t possess the ball it’s rough to win.”

Less credited his defense for playing well despite being put into some challenging positions.

“I thought my back three did well. The 3-0 score looks bad on the defense but I thought they played well. None of the goals were their fault,” he said. “Marissa Artrip, Ellie Clymer and Christa Zubic, who I thought had a heck of a game, and then Maria DeFini went in there for a little bit too. I thought they played real well. If we cleaned up the mistakes we would have been fine but unfortunately we made the mistakes.”

Independence closed out the year with a 10-7-1 record.