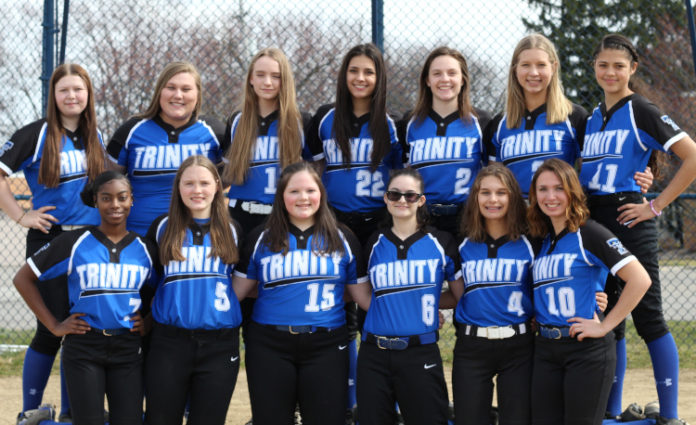 While most area baseball and softball teams are adapting to some new faces in the lineup after a two-year layoff, the Trinity softball squad has a few more challenges ahead of it.

Burke believes the Trojans are up to the task.

“I think we will compete well this year,” she said. “Being in a new conference, we do not know much about our opponents, so every day will be a new challenge but I think this group is up to it. We have added several newcomers to this year’s varsity team who all bring a quality work ethic each day. It is great to see the team work together and push one another to be better.”

Trinity returns three starters from the 2019 squad that finished 9-6 overall and 7-1 in the NCL.

Yet, for Burke, she’s seeing each player for the first time.

“Being a new coach, as well as having lost a year, has made it very difficult to establish a lineup so far,” she said. “Each position is working hard to compete with one another and win a starting spot on game day. The biggest challenge has been having a large group of sophomores who have never truly competed at the high school level. The jump from middle school softball to high school varsity is quite a large gap, but our upperclassmen have stepped into their leadership roles well and have helped the younger players make the adjustment to compete at a higher level.”

Burke has relied on the seniors to set the tone and to mentor the younger players.

“We have an excellent group of leaders,” she said. “Our returning seniors have been incredible in terms of taking underclassmen under their wing and showing them the ropes. They have really stepped up their game in order to create a competitive atmosphere at practice, helping everyone to improve their game. This group also has great team comradery and holds each other accountable, encouraging high expectations and high performance.”

Summer Wrobel, a first-team All-NCL selection in 2019 and a Notre Dame College signee, will once again figure prominently in the Trojan lineup.

She played primarily at first base as a sophomore but filled a need for the Trojans this season by moving into the pitching circle. Sophomore Carolyn Klein will also throw some innings for Trinity this spring.

“(Wrobel) has accepted and embraced her new role on the mound,” Burke said. “She will help set the tone on defense as well as keep everyone calm and determined to play to the best of their ability. Summer will also be a key bat in our lineup using her speed, power, and knowledge of the game.”

Senior shortstop Katie Ziegler is back after earning honorable mention all-conference honors as a sophomore.

“Ziegler will provide a steady bat in our lineup,” Burke said. “She will be a key role on offense as well as command the infield at shortstop. She has adapted to being a leader extremely well, leading both vocally and by example, on the field and in the classroom. Ziegler always goes the extra mile to be great, and I am excited to see how that reflects in her performance for her senior year.”

Senior Camryn Dorris will play second base and also will spend some time behind the plate.

“She is constantly working to be better and has shown incredible determination in practice,” Burke said of Dorris. “Camryn is one of those players you could tell to run through a brick wall and she would do it without question. I am excited to see how she adjusts to playing multiple roles for this team, as well as how she builds confidence and carries this grit into games.”

A new face in the lineup is senior Anna Ibos, a four-year standout in both basketball and track for the Trojans.

She’ll play third base and could see time in center field.

“Although Ibos is a new addition to the softball team this year, our staff is thrilled to see her improvements in practice and how she has embraced every opportunity given to her,” Burke said. “Her drive and competitiveness have provided her with the ability to face new challenges at center field and third base, as well as overcome them and perform at a high level. She will play an important role in the success of both the infield and the outfield throughout the season. We are excited to see Ibos in action and how she continues to improve not only herself but those around her as well.”

Sophomores Raven Hurley and Mary Vitale, and freshman De’Oshania Bennett also will fill a spot in the Trinity starting lineup.

Hurley will catch and play second while Vitale will patrol center field. Bennett is locked in at first base.

Burke is still evaluating her options in left and right field.

“Having a young squad has its pros and cons,” Burke said. “I expect some pregame jitters taking the field for the first time, as all players get at some point. It will be an adjustment for them to learn the quickness and intensity of high school softball, but I am excited to see how they embrace the challenge and grow throughout the season.”

That growth will determine how much success Trinity enjoys this season.

“Progressively getting more mentally tough throughout the season and in game situations will be a major factor in being successful,” Burke said. “Without a season in 2020, it is easy to forget how softball is more of a mental sport than anything. It will be harder to remain as tough mentally as we are physically. Pushing through each practice and game, focusing on quality reps, and staying together as one unit will be a major part of a great season.”

Bison focused on the fundamentals

Trinity eager to compete in CVC