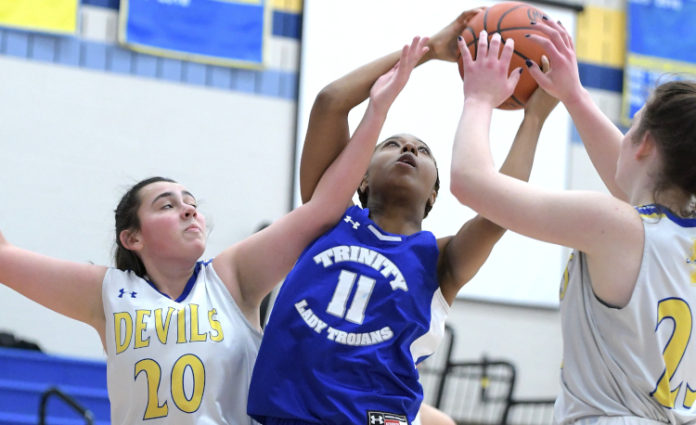 Trojans dominant in win at Independence

INDEPENDENCE—With a convincing win over defending champion Independence, Trinity staked its claim to the top spot in the Chagrin Valley Conference Metro Division.

The Trojans got off to a fast start and never let up in beating the host Blue Devils on Saturday, 54-30.

“We know how good Independence is and I know Mike (Marcinko) is one of the better coaches around here,” said Trinity coach Kevin McNamara. “Year to year, they’re the team to beat so we wanted to prove something today.”

Prove it they did.

Trinity outscored the Blue Devils in the first quarter, 16-10, then extended that lead to 28-16 at the break.

They did with an attacking defense that shut off passing lanes and created transition scoring opportunities.

“Their game is played at 90 miles an hour and we’re kind of at 80,” said Independence coach Mike Marcinko. “It didn’t quite mesh but they’re extremely talented.”

She opened the game with a 3-pointer and an elbow jump shot then slid into the paint to disrupt Independence’s offense.

“When you’re 6-2 and you have to figure out what to do with her and then she can rebound and go inside, that’s a weapon,” McNamara said. “We know that gives us an advantage.”

Sophomore Mahogany Cottingham led all scorers with 12 points. She drained three 3-pointers in the second quarter to help the Trojans pull away.

Senior Jaida Malone took over in the third quarter and finished with 11 points and Anna Ibos and Stanley finished with eight and seven points, respectively.

“This was only our second game,” McNamara said. “In 60 days, we really hadn’t played any opponent other than ourselves and out of those 30 days, we weren’t even in the gym so there was some rust.”

“I told the girls there were a lot of things we did well execution-wise offensively and then missed the shot or bobbled the ball,” Marcinko said. “We got what we wanted and bobbled the ball. We’ll watch the film as coaches and you always learn more from a loss.”

Trinity improved to 2-0. The Trojans travel to Brush on Monday.

Independence dropped to 6-3 and will look to get back on the winning track at rival Cuyahoga Heights on Wednesday.

Skippers clicking on all cylinders