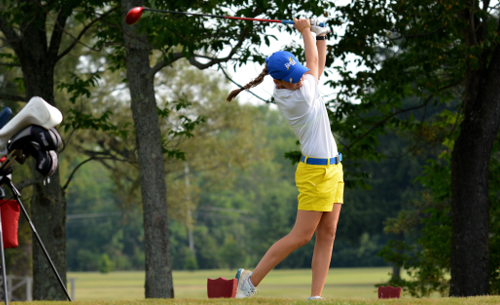 Independence doubled down on the Ward’s Lawn Care & Landscape Co. Player of the Week award.

Blue Devils Sophia Trombetta and Maura Collins both earned the honor after leading their respective teams in the week ending Sept. 28.

Trombetta, a sophomore golfer, won medalist honors at both the Chagrin Valley Conference postseason tournament and in a dual against Revere. She shot 80 at the CVC tournament, which was played at Legend Lakes, and 38 in the match against Revere.

“Sophia is a fantastic golfer,” said Independence coach Karl Schuld. “She has led our team in every statistical category for the past two years. Sophia's short game, particularly her chipping, is as good as any player I have seen.”

Trombetta leads the undefeated Blue Devils in scoring average with a 38.56 average on nine holes and a 79.74 on 18.

She also excels in the classroom and is well-respected by her teammates.

“Sophia is a very good student, as her scheduled is filled with honors level classes,” Schuld said. “Sophia takes joy when her teammates succeed and she is very humble about her accomplishments.”

Collins, also a sophomore, has been a key player for the Blue Devils, who are undefeated in league play.

“Maura is a young leader who has so much potential in the sport of volleyball,” Osysko said. “She continues to learn and work hard each time she steps onto the court to improve not only herself but also her teammates.”

Coaches, click HERE to nominate your athletes for Ward’s Lawn Care & Landscape Co. Players of the Week. Athletes from all Northeast Ohio schools are eligible for the award and nominations are due by 10:00 p.m. every Tuesday.