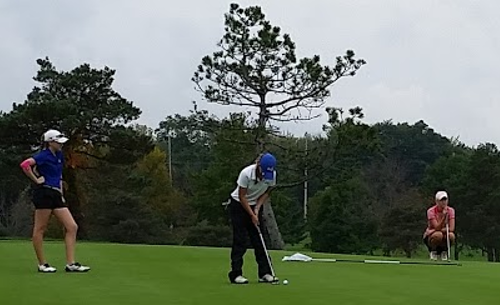 NEWBURY—Independence sophomore Sophia Trombetta shot a 73 to win the Division II sectional golf tournament at Punderson Golf Course on Tuesday. Trombetta and the Blue Devils finished second as a team to earn a spot in next week’s district tournament at Tam O’Shanter Golf Course in Canton.

Trombetta, sophomore Lyndsay Blum (89), senior Kaylie Kemenyes (92) and junior Bryleigh Wise (95) combined to shoot 349 as a team, a new school record. Although her score didn’t count in the team total, Madeline Mindzora shot a 104, which tied her for 31st overall out of 79 golfers.

“It was a very good day,” said Independence coach Karl Schuld. “We got good team results 1-5. Madelyn Mindzora had a 104, which I think was 31st on the list. For a lot of schools, her score would have counted. It was definitely a 1-5 effort. With only four counting we were happy with everybody.”

She eagled the second hole and finished with a birdie on No. 18, despite her tee shot hitting a tree and dropping in the rough about 100 yards into the 389-yard Par-5.

“It all started with Sophia with her outstanding score,” Schuld said. “I knew it was going to be a good day. I could just tell. She just had that sparkle today and right away had an eagle on No. 2 to get it started. She holed in from about 80 yards. She just has a phenomenal understanding of the game of golf. She’s just an amazing kid when it comes to her golf game.”

Following Trombetta’s tee shot on 18 she put herself in position to par the hole with a nicely played second shot. Her chip landed just a few feet from the hole and she putted in for the birdie. That stroke was the difference in holding off Lutheran West’s Maddie Thomas, who finished second with a 74.

Blum shot 45 on the front and closed out the tournament with a 44 on the back 9 to finish ninth overall.

“She played well but I think she was a little disappointed,” Schuld said. “In her mind, I think she wanted to put up a little better score but I was very pleased with her. She fought through kind of a rough start and hung in there. Her putting wasn’t quite as sharp today as it’s been, but she posted a great score for us.”

Kemenyes and Wise placed 11th and 15th overall, respectively. Wise recovered from a 51 on the front 9 and finished with a 44 on the back, despite finishing the final two holes in a downpour.

“Kaylie has just gotten better and better over the last two or three weeks and I think part of it is just believing in herself and understanding that she can do it,” Schuld said. “That’s really the same thing with Bryleigh. Once again, it’s a matter of those two playing with confidence. They have tremendous physical ability and with the physical comes the mental and I think they put the two together. Bryleigh ended up finishing in the rain, that pouring rain. I wonder if she probably cost herself a stroke or two because she was rushing.”

The trip to districts is the second for the Blue Devils. They qualified as a team last year in the program’s first year of existence.

That year of experience on the big stage should help the girls as they try to earn a spot in the state tournament.

“We’re going to go down and do the best we can,” Schuld said. “We’re going in with a different attitude than we did last year in one respect, which is I think we know we can compete. Last year we were just going down there to see what is going on at the district level. This year I think we know we can compete. Four of my five girls played there last year. Our attitude is we just want to have fun. If we have fun and golf to our abilities we’ll see what happens.”