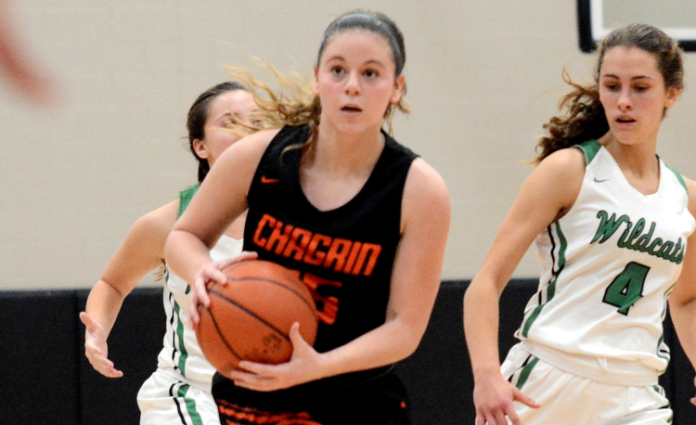 Unselfish Tigers are deep and talented

While Chagrin Falls returns just two starters from last season, the Tigers do have six seniors and a host of talented underclassmen on their roster.

It’s that senior leadership and depth that could prove beneficial for the Tigers as they prepare for the 2020-2021 season.

“We have a solid senior class that has shown a tremendous amount of leadership and plays unselfishly,” said 11th-year head coach Brittany Anderson. “This group is capable of playing any position on the floor and will go anywhere the team needs them to play. We lost a lot of scoring from last season, but each individual has the ability to chip in and contribute each night. Thus far, we’ve played really well as a team and there has been great ball movement on offense and communication on defense. There is a wealth of potential with this group because of this unselfish play.”

Anderson, who is 154-83 at the school, does have seven varsity returners on the roster this season, which leads her to believe her team is capable of improving upon its 16-8 record from last season.

“We have quite a few players with a similar style of play who can finish inside and handle the ball on the perimeter, which makes it much easier to sub and put different athletes on the floor,” she said. “It will keep us fresh and allow us to push tempo and be more aggressive on defense.”

The Tigers are preparing for a challenging schedule but they’re also focused on individual safety knowing the balance of their season hangs on controlling the spread of the Coronavirus.

But, for the Tigers, it’s not their season that drives their focused approach to safety.

“We practice in our masks the entire time, not because of the ‘We Want a Season’ campaign, but because we care about one another and our families,” Anderson said. “We can’t worry about what we want or think about what we deserve. This is an unselfish group that cares about one another. We are doing everything we can to keep each other healthy, to continue to attend school, and to enjoy every second we have together on the floor. We are going to make the most of every opportunity we have together.”

Anderson projects four seniors and a junior will fill out the starting lineup.

Among that group are All-Chagrin Valley Conference performers Lily Karyo and Julia Santamaria.

Karyo, a 5-foot-7 guard/forward who will earn her fourth varsity letter this season, was named honorable mention all-conference after averaging 3.7 points, 2.3 rebounds and hitting on 60-percent of her free throws last season.

“She has the experience and the leadership qualities that this team needs,” Anderson said. “Lily returns to the guard spot after playing at the small forward for the last two seasons. She stays cool, calm, and collected during the games and will be called upon to run our offense this season. Lily has great moves to finish inside and can shoot from the perimeter, bringing a lot of options to the table.”

Santamaria, a 5-foot-7 forward, also earned honorable mention all-league honors after averaging 4.7 points, 3.2 rebounds and hitting on 64-percent of her free throws as a junior.

“Julia is a high-motor player and once she fires up, she is difficult to stop,” Anderson said. “She is undersized in the post but outhustles anyone she matches up against. Julia’s high basketball IQ helps her to make great decisions and find the best look for herself and her teammates.”

Seniors Sadie Nachtwey and Emma Livingston and junior Peyton Gellin also are projected to start for the Tigers.

Nachtwey is a 5-foot-6 guard/forward.

“I’ve coached Sadie since her rec league days and she is someone that I can count on and trust,” Anderson said. “Sadie plays with fire and wants to do whatever she can to help the team out. She has a great outside shot and has worked incredibly hard in the preseason to play at a new spot on the floor.”

Livingston is a 5-foot-11 forward who was a regular in the lineup last season but now will be counted on to perform at an even higher level.

“Emma played in all 24 games last season, but came in behind Katie Kwasny, who had a phenomenal season for us last year,” Anderson said. “We expect Emma to pick up where Katie left off, bringing the passion and intensity to the interior. Emma has the ability to play physical, change shots, and help to direct our defense from the backline. She will be counted on to rebound for us and be an enforcer in the paint.”

“Peyton is one of, if not the, most athletic players I have ever coached,” Anderson said. “She is an extremely talented soccer and lacrosse athlete and we’ve been working to translate that speed and stamina to basketball. Peyton plays aggressive defense and turns that into offense. She is a huge threat in transition and will be our leader on the defensive end this season.”

“Marley’s length and speed make her a difficult matchup for teams. She can take taller players out on the perimeter and post up the smaller ones inside. She is our best shot blocker and has great finesse and finish inside,” Anderson said. “Gillian is another player from this senior class that I’ve coached forever. She has such a positive, unselfish attitude that she is willing to go anywhere on the floor to help out the team. She is another athlete that will make matchups difficult.”

“Madalyn worked so hard this summer to improve little details in her game. She isn’t afraid to play physical and get her hands dirty. She is another extremely coachable player that will play whatever role you need,” Anderson said. “Aubree is incredibly bright and uses careful decision-making to make plays. She is unselfish and looks to get teammates open and give them opportunities to score. Her on-the-ball defense is outstanding and she has a nice outside shot.”

“Kate is another outstanding athlete who has great speed and can force other teams to change their plays. Peyton and Kate will be our 1-2 punch on defense. Kate’s speed and length make her difficult to get around and she forces turnovers with her anticipation. Kate has also diversified her game on offense and can score anywhere on the floor,” Anderson said. “Jenna’s basketball IQ and outside shooting help her to stand out. She has already been called upon multiple times this preseason to fill in and help out in a variety of roles.”

The Tigers have the talent and determination to achieve their goal of winning the CVC Chagrin Division title and potentially make a deep postseason run.

Their success hinges on each player stepping up in her individual role and the team playing as a unit, especially on the defensive end.

“We need to make sure that we are the harder working defensive team in each matchup,” Anderson said. “Good defense is a key to our success. We want to limit our opponents’ offensive opportunities as much as possible. Taking care of the basketball and avoiding careless turnovers will be another factor. We have to use our experience to manage the tempo of games and take the time to run what we want to run.”