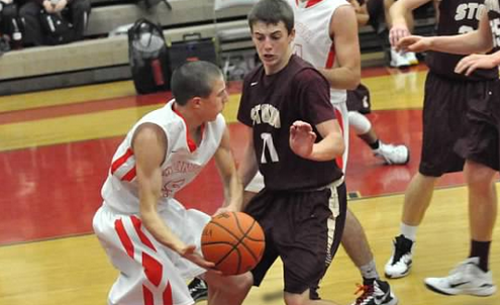 An 82-66 win over visiting Stow wasn’t perfect, but the veteran bench general with more than 500 wins saw enough positives in the victory over the Bulldogs to make it a happy holiday for the Cardinals.

A 17-0 run in the first half fueled Mentor to a halftime lead, and junior guard Andrew Valeri’s huge second half (team-high 22 points) helped the Cardinals hold off Stow and stretch their winning streak to three after an opening-night loss to Garfield Heights.

“I didn’t think we played tough,” Krizancic said. “We went in at halftime and we looked at the offensive boards. We got zero offensive putbacks.

“I didn’t think we played a real strong game. We hit some 3s, we had some spurts. The only thing I’d tell you, against a Stow team, I think we dictated tempo. That’s one thing I was pleased with. Scoring 82 against them, Hudson scores 41 …. That was the best thing about the night.”

The Cardinals took the last of several lead changes in the first quarter when Valeri hit Paul Sateika for a layup and a 16-15 lead at the buzzer.

Following two straight Stow buckets that gave the Bulldogs a 19-16 lead, Mentor ripped off 17 unanswered points, including five straight 3s. Despite the run from the Cardinals, the Bulldogs answered with a 14-6 run to end the half and keep the game within six points.

Stow stayed close in the third, but Valeri kept the visitors down 65-51 to start the fourth with an impressive long-distance display.

The 5-foot-7 junior tied with Stow’s Nathan Bower-Malone for a game-high 22 points.

“He’s capable of dominating a game at his size,” Krizancic said of Valeri. “We keep telling him, ‘If you take out the 4 or 5 or 6 weak possessions that you have, you look like a great guard in the state.’”

Valeri admitted the schedule will get much tougher with a trip to Nashville after Christmas and a game against Villa Angela-St. Joseph, but he was pleased with most of the effort against Stow with a few moments that need to be cleaned up.

“I felt like I had to do it for my team,” Valeri said of his big game. “The biggest issue was controlling tempo, and I felt like at one point we were losing control of tempo. I felt like if we could get the (fast) break and we could get some shots off — you know, luckily I had that one in transition and it fell, and then everything was just kind of downhill from there.”

The largest Mentor lead of the game came midway through the final quarter on an Adam Smith assist to Valeri that made it 73-56. Krizancic emptied the bench late before putting the starters back in when things got a little interesting in the final minutes. Overall, it was the Cardinals that controlled the night vs. Stow.

Mentor will begin a stretch of five games in six days starting the day after Christmas during the Mentor Holiday Hoops tournament before heading to Nashville, Tennesse, for the Next Level Hoops Tournament.

The Cardinals will play Riverside on Dec. 26 and have a potential matchup with neighborhood rival Lake Catholic on Dec. 27 if both teams either win or lose on the first day of the tournament.

Immediately following the home tournament, Mentor will head south to Nashville to face some of the top teams in that area in one of the country’s elite fields in Tennessee.

“We had our schedule set when we got invited to Nashville, so I called the players in, I explained the seven other teams that were there — the best in Georgia, the best in Louisiana, best in Alabama, best in Arkansas — and three of them coming back said, ‘Let’s do it. Let’s do it. Let’s do it.’ So I said, ‘Ok, know what we’re up against,’ ” Krizancic said. “No matter what happens, I guarantee you we’re going to come back a better team. You want to win, but we’ll come back better.”

Kyle McIntosh scored 13 for Mentor. Micah Potter and Adam Smith each added 10 for the Cardinals.