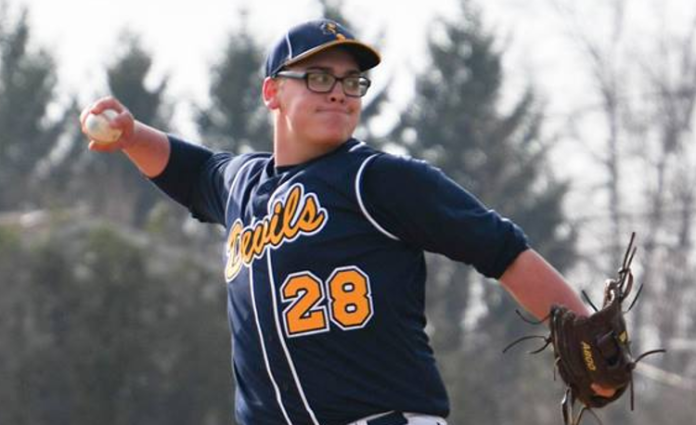 Athletes from Chagrin Falls, Chardon, Cuyahoga Heights, Kenston, Mentor, South and Wickliffe have been named the Varsity Travel Players of the Week for the week ending April 14.

Name: Richie Allison
School: Cuyahoga Heights
Grade: 12
Stats: Batted .688 (11-for-16) with 4 doubles, 1 home run, 6 RBI, 5 runs scored and was 1-0 on the mound with 0 earned runs allowed, 10 strikeouts and gave up 6 hits in 6 innings
Coach’s Quote: “Richie continues to prove himself as a leader not only for our team, but also as one of the top players in the area,” Cuyahoga Heights coach Jake Solomon said. “He continues to get better every single day and that comes directly from the countless number of hours he puts into the cage outside of our practice and game time.”

Name: Cole Weiss
School: Chagrin Falls
Grade: 12
Stats: Pitched a no-hitter with 7 strikeouts
Coach’s Quote: “Cole has worked extremely hard in the offseason on his pitching and it certainly has paid off,” Chagrin Falls coach Michael Sweeney said. “He is currently 3-0 with a 1.91 ERA and he is only going to get better as the season goes on. Cole struggled with his control in the early parts of the game against West Geauga, but then he dominated at the end of the game and looked stronger in the seventh inning than he did in the first inning. I am very proud of what Cole is accomplishing on the field. However, I am even more proud of the leadership he is displaying for this team.”

Name: Riley Frizell
School: Willoughby South
Grade: 11
Stats: Batted .692 (9-for-13) with 4 doubles, 3 home runs, 2 grand slams, 17 RBI, 7 runs scored, 2 walks, .692 slugging percentage, and went 2-0 in the circle with 13 strikeouts in 12 innings
Coach’s Quote: “Riley is a very special player, she hits for power and average,” South coach Erin Dodson said. “One swing of her bat is a game changer, but it’s not just her physical skills that make her so special. It’s what you can’t teach–her work ethic, leadership, love of the game that set her apart.”

Name: Brooklyn Mack
School: Kenston
Grade: 12
Stats: Batted .533 (8-for-15) with 1 double, 2 triples, 8 RBI, 3-for-3 in stolen base attempts, a .579 on-base percentage and an .867 slugging percentage and the game-winning RBI against Cuyahoga Falls
Coach’s Quote: “Brooklyn continued her great start to the season this past week, leading us offensively and defensively,” Kenston coach Annie Dubovec said. “Right now, she is playing at a high level in every facet of the game.”

Name: Casey McHugh
School: Mentor
Grade: 11
Stats: Batted .714 (5-for-7) with 3 doubles, 1 triple, 6 RBI, 4 runs scored, 2 stolen bases and 9 putouts
Coach’s Quote: “Casey had two really big games for us against Riverside and Strongsville,” Mentor coach Michelle Thompson said. “She had been struggling a little at the plate, but made some adjustments and has been a hitting machine ever since. She had a huge triple against Riverside to put us up in the seventh inning. She was 4-for-4 with all four hits being doubles against Strongsville.’

School: Chardon
Grade: 12
Stats: In 21 innings pitched, won three games, didn’t allow an earned run and struck out 37; also batted .438 (7-for-16) with 2 doubles, 1 home run, 4 RBI, 6 runs scored and stole two bases
Coach’s Quote: “Kayla continues to dominate on both sides,” Chardon coach Stewart Landies said. “She had a 0.00 ERA over 21 innings pitched and continues to be the spark in the Hilltoppers lineup.”