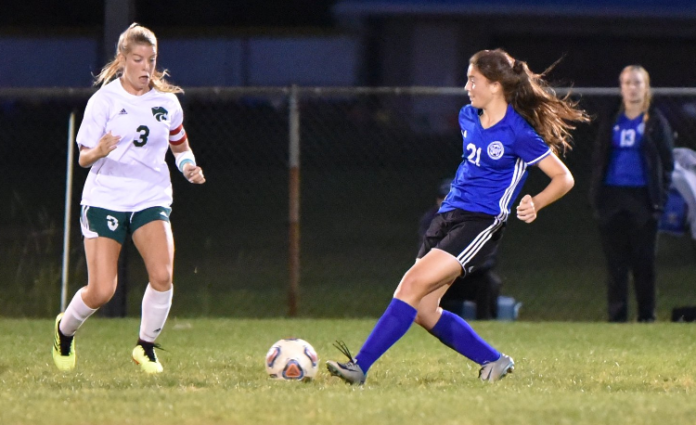 Student-athletes from Beachwood, Cardinal, Geneva, Independence, Madison, Orange and Richmond Heights have been selected as the Varsity Travel Athletes of the Week for the week ending Oct. 7.

Each student-athlete was nominated by his or her coach.

Name: Erica Esper
School: Independence
Grade: 12
Stats: Finished 22nd at the Legends Meet after finishing 182nd in 2017
Coach’s Quote: “Erica entered cross country season in much better shape this year and is racing nearly two minutes faster than she did last year, her first season of competitive running,” said Independence coach Craig Polman. “Despite losing a shoe in the mud with over a mile to go in the race at Trumbull County Fairgrounds, Erica persevered turning in what may have been her best performance of the season helping to secure a fourth-place team award.”

Name: Emmanuel Sims
School: Richmond Heights
Grade: 12
Stats: Recorded two receptions for 55 yards and two touchdowns, seven tackles, a sack and an interception and he punted four times for 150 yards with one downed inside the 20
Coach’s Quote: “Sims played outstanding on both sides of the ball,” said Richmond Heights assistant coach Derrick Fair. “Defensively, he slowed Berkshire down as they attempted to hit the edge in the run game as they like to do. In the second half, Sims dropped from his defensive end position to cover Berkshire’s tight end and held him to zero receptions and caught an interception which he almost scored on. Sims had two big play receptions on the offensive side of the ball. Sims saw a lot of double coverage during Friday night’s game from Berkshire.”

Name: Diante White
School: Orange
Grade: 11
Stats: Ran for 182 yards on just nine carries with three touchdowns, caught three passes for 65 yards and completed a 49-yard touchdown pass; also recorded six tackles
Coach’s Quote: “Diante had a spectacular night for us,” said Orange coach Adam Bechlem. “He was a part of five touchdowns in helping us get a big win on homecoming a week after coming off our first loss. It felt like he could score every time he touched the ball.”

Name: Casey McGhee
School: Independence
Grade: 9
Stats: Scored two goals with two assists
Coach’s Quote: “Casey had two big games against Berkshire and Elyria Catholic with two goals and two assists,” said Independence coach Ryan MacRaild. “He can play both wide mid and central mid and is a threat to shoot or distribute. But defensively, he has played much bigger than a freshman and that has helped us to our 12-0 record.”

Name: Chloe Wakim
School: Madison
Grade: 10
Stats: Helped lead the Blue Streaks to 10 shutouts this season
Coach’s Quote: “Chloe has come up with many huge saves this year as a defender,” said Madison coach Chad Butler. “When all looks lost, Chloe repeatedly comes out of nowhere to clear our lines and preserve the shut out. In our first-ever shut out of Mayfield, she went up against their best striker all night long and denied her the back of the net for 80 minutes without a sub.”

Name: Camille Cummins
School: Cardinal
Grade: 12
Stats: Recorded 64 kills in three games including a school-record 31 kills in a win over Beachwood
Coach’s Quote: “Camille has really stepped it up this season,” said Cardinal coach Karisca Chambers. “The amount of work she did in the offseason really has shown through during gameplay. She’s a great leader and able to shake off her mistakes. I’m so proud of her and I can’t wait to see what she does for us in the postseason.”

Name: Becca Quirk
School: Geneva
Grade: 11
Stats: Recorded 34 points with five aces during the week and now has 40 aces on the year
Coach’s Quote: “Becca has been our strongest server this year,” said Geneva coach Annah Haeseler. “Her serving is like no other. It is powerful, but what is special about her serve is that she can hit any spot on the court. I give her a number, she hits it with accuracy and power. She is also a great setter. Her ball placement is on point and she has a calm, quiet leadership style that helps to set the tone for this group of girls. I am lucky to have such a versatile player on my team.”