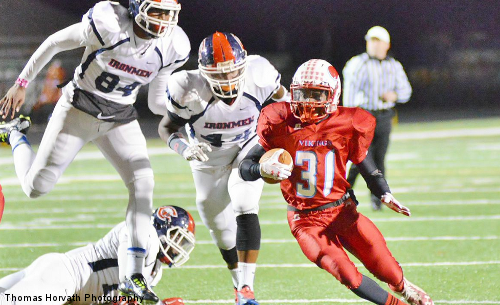 With every game being a must-win for more than a month, Villa Angela-St. Joseph has been in playoff mode since Week 5.

Now, it is officially postseason time for Coach John Storey and company.

Behind 314 yards rushing and three touchdowns by standout Marvelle Ross, VASJ rolled over rival Cleveland Central Catholic, 44-18, on Nov. 1 at Mayfield's Wildcat Stadium. The win not only secured the outright NCL White Division championship for the Vikings, it locked up a spot in the Division VI playoffs as well.

According to joeeitel.com, VASJ will be the No. 7 seed in Region 19 and travel to Sugarcreek Garaway on Nov. 7 to face the second-seeded Pirates in a regional quarterfinal.

VASJ led, 14-6, at halftime, but a 44-yard run for a touchdown in the third quarter by Ross and a 34-yard run through the defense in the fourth quarter by the senior tailback helped put the game away.

"In a game like this, we just had to come and play big," Ross said. "We seniors had to step up, make plays and play hard and give it our all. Play like it was our last game."

"The senior class has really come together, and their leadership has been sound for us," said VASJ coach John Storey. "We knew (two years ago) that this was a good group and that we just had to keep them together and get them into the weight room and get some victories last year as juniors, which they did, and work to get back into the playoffs this year."

VASJ's lead grew and then shrunk to 30-18 in the second half before Ross and Williams put the victory on ice with scores.

Aaron Rocquemore added 108 yards on the ground for VASJ.

Ross drew plenty of attention and accolades after the game, but Storey was quick to mention it was a team effort for the Vikings.

"I'm glad he's on our side," Storey said referring to Ross. "But his offensive line does a nice job for him, too.

"It doesn't matter where we go (in the playoffs), we are in. We talked about it (getting in) early on, worked for it, and now we're there. So it's a whole new season."