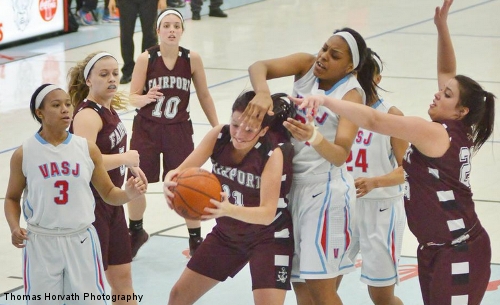 The winning streak for the Villa Angela-St. Joseph girls basketball team has reached 13.

More importantly to Coach Tony Redding and company, the Vikings have reached the Division IV district semifinals and the goal of winning a state title is still within reach.

VASJ routed Fairport, 59-36, in a D-IV sectional final at Viking Village on Feb. 28. Twelve players scored for the Vikings, who have won 13 straight games since a loss on Jan. 10 to St. Thomas Aquinas.

“This is a very talented group, and over the 22 games in the regular season they have become very close and have bigger goals,” Redding said. “Winning today and winning the next game and trying to compete for a state championship like every team that is still playing is the goal.”

Angelina Goosby was the lone VASJ player in double figures with 11 points, but it was a typical Viking performance with a deep and balanced offensive attack complementing an aggressive pressure defensive approach.

VASJ is 21-3 and will play top-seeded Windham in a D-IV district semi on March 4 at Grand Valley High School. The Vikings are focused on returning to the district title game, where their season ended last March in a loss to Cuyahoga Heights.

“There is not pressure (with the streak). I don’t think they are ready to stop or be done. They like playing basketball,” Redding said. “We have been talking to the girls about humility and not thinking we are better than we are. But, if we click on all cylinders and ever have that game where everyone is playing their game, it could be something to see.