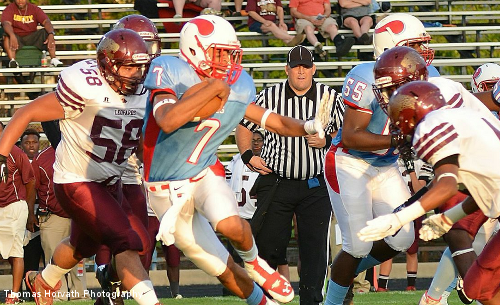 VASJ offense in midseason form in season-opening win over Liberty

A powerful offensive attack led the 2013 Villa Angela-St. Joseph Vikings to a memorable 9-2 season and a Division VI playoff berth.

One game into 2014, VASJ seems headed in a similar direction with the same kind of high-scoring firepower.

Senior running back Marvelle Ross ran for 150 yards and scored four touchdowns, senior quarterback Tre’von Williams ran for two touchdowns and threw for two more, and the Vikings defeated visiting Youngstown Liberty, 54-29, at Sparky DiBiasio Stadium in Euclid in the season opener for both teams.

"This felt good tonight. This is what we were waiting for,” Williams said. “It’s our senior year. We’ve got to get the job done. We want to leave a legacy.”

The legacy Williams and company is yet to be determined, but there were no questions about the impression the VASJ offense left Saturday night.

VASJ scored on the opening possession as Williams snuck in from a yard out and rolled from there, building a 34-7 lead while piling up 310 yards of offense in the first half alone.

Youngstown Liberty, who made the playoffs in 2013, scored two touchdowns to start the second half to make it a game. Talented sophomore Lynn Bowden ran 21 yards for a touchdown. Then after the Vikings punted, Bowden capped a 54-yard drive with a 3-yard score and a two-point conversion run to make it 34-21.

Ross answered by scoring on consecutive drives, one ending in a 2-yard touchdown run and the next ending with a 17-yard TD scamper to push the lead back out to 47-21.

After a resurrection from a 1-9 season in 2012, VASJ used a senior-laden lineup and strong chemistry to roll past the Leopards and continue the momentum from last fall.

"The only thing we were guaranteed tonight was playing a football game. The rest we had to earn and I think we did that," VASJ coach John Storey said. "Liberty is a good team. Bowden is a very good player. It's football. They are going to make some plays, they have great athletes. We were able to do some good things and put points on the board."

Brandon Green caught a touchdown pass and Aaron Roquemore ran for a score to help the Vikings put plenty of points on the board against Liberty.

VASJ must now prepare for old rival Euclid on Sept. 6, renewing a series that hasn't been played in almost a decade.

"It felt really good tonight to come out and play a good game with my brothers, with this family on the team, and now we have to have a good week of practice and get ready for Euclid," Ross said.

VASJ's Jacob Stauffer was inserted on defense in the second half and had several key stops from his defensive end position.