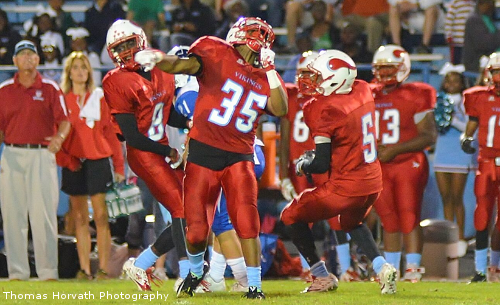 The Drive for Five is now a Flurry for Four.

Villa Angela-St. Joseph coach John Storey has described the NCL White schedule and the push for the playoffs as a Drive for Five, but after a 46-0 win at Valley Christian, the Vikings are one step closer to their goals.

VASJ moved to 4-2 on the season and 1-0 in league play with a resounding road win on Oct. 3 at Poland Seminary High School. The Vikings will host Warren JFK on Oct. 10 at Sparky DiBiasio Stadium.

“We did what we were supposed to do and what we needed to do tonight against a young talented team,” Storey said.

“(Jerry) Higgins had a great game and the guys up front did their job. It was a good game for our guys. We are still young and still learning. That’s one of five on the Drive for Five.”

VASJ sophomore Jerry Higgins, who rushed for 213 yards on 14 carries, once again shined bright for the Vikings, scoring three touchdowns in the rout. Higgins has 14 touchdowns on the year.

Fullbacks Malik Calloway and Delanoe Harris, Jr. each had one rushing touchdown for VASJ. Sophomore quarterback Aubrey Shabazz accounted for two touchdowns, one rushing, the other a 69-yard pass to junior receiver Danny McGarry.

The Viking defense recorded its second shutout of the season and have only allowed 51 points through six games.

“We have some guys playing very well on defense, like Marco Young, Mason Alexander, Kevin Mullin, Aaron Lee and others. Those guys are really doing a nice job.”