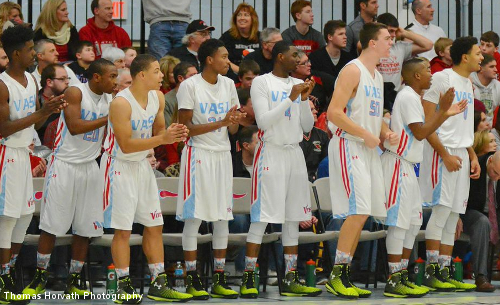 Some people might have thought it would have been easy for Villa Angela-St. Joseph to overlook visiting St. Thomas Aquinas on Jan. 16 and start thinking about a nationally televised showdown against Oak Hill Academy on Martin Luther King Day.

Good thing for Coach Babe Kwasniak there wasn’t anybody who thought that way that was in the home locker room at Viking Village.

A focused VASJ squad dominated the No. 1 team in the Ohio AP Division IV state poll from the opening tip, getting a season-best shooting performance from senior guard Simon Texidor in an 83-43 win.

The Vikings led, 26-5, after one quarter, 52-18, at the half, and by 40 to start the fourth quarter. Texidor’s outside hot hand made big men Carlton Bragg (16 points) and Dererk Pardon even tougher to deal with for the smaller Knights. Texidor finished with five 3s and a game-high 24 points.

All this a few hours before getting on a plane for Massachusetts and three days before playing one of the nation's top programs on ESPNU on Monday afternoon.

“My teammates and coaches said I was due for a game like this,” Texidor said. “My teammates kept looking for me and I was just ready to shoot.

“We didn’t want to look past this game because we had a big game on Monday. They could come here and beat us any time. They played for the state championship last year just like we did so no way were we going to look past them.”

Jeff Grudzinski and Jaevon McClain each had 11 points to join Texidor and Bragg in double figures.

Overall, 11 players scored in the game for VASJ (9-0, 3-0 NCL) and the starters were mostly rested from the middle of the third quarter on.

“We had 17 assists and five turnovers in the first half,” Kwasniak said. “We love to pound the ball inside, and Simon is a prolific outside shooter. He is a Division I shooter. And it is crucial to have a point guard like Mo (Johnson) who knows where the ball has to be all the time.

“The guys on the bench deserved to play those minutes, so it was good to see. But, we had a little let down in the second half, I think it is because we played so well in the first half. …. This game coming up against Oak Hill is a great opportunity for our young men, and I think we are going to represent ourselves, our school, our community and Cleveland basketball well. I love this group and wouldn't want to play a team like Oak Hill on national TV with any different team."