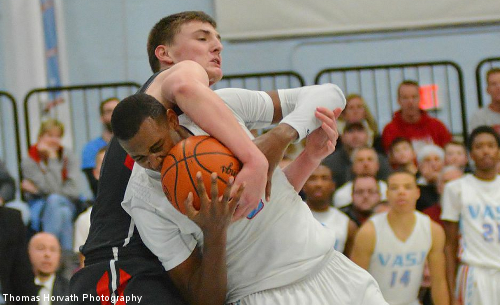 VASJ remains undefeated by holding off Mentor, 72-59, at sold out Viking Village

Villa Angela-St. Joseph has had its way with teams in Ohio through the early part of the season, outscoring five in-state foes by at least 39 points in five easy victories.

Vikings coach Babe Kwasniak has too much respect for Mentor coach Bob Krizancic and the Cardinals to have thought the Jan. 10 showdown at Viking Village would be equally as easy.

However, when the clock hit all zeroes at the end of the fourth quarter, VASJ was once again on the right side of the scoreboard as the Vikings have been for all eight games played this winter. VASJ got 31 points from Kansas recruit Carlton Bragg and outscored Mentor, 17-6, over the final 8 minutes of play for a 72-59 triumph in front of a sell-out crowd.

The Vikings improved to 8-0, and are nationally ranked by several media sources including MaxPreps.

“A ton of respect’ doesn’t do it justice, the amount of respect I have for that man,” Kwasniak said of Krizancic. “I love the product he produces. For whatever reason, maybe it’s because he doesn’t always have a bunch of guys going and playing big-time, Division I college basketball, yet they’re always there to win a state championship. I’ve said this many times, Bob Krizancic might be the best coach in the state, regardless of high school, college or pros. I think that highly of him, so we faced some adversity. Playing them is adversity. Our kids will tell you, we played two nationally ranked teams, but it’s way worse guarding them. Obviously a great win for us.”

Krizancic has proved over a Hall of Fame career that he can get a team ready to play the best of the best, and play well. The 13-point setback against the Vikings, who got big efforts from Marist recruit Brian Parker (17 points, 10 rebounds, six assists) and Northwestern recruit Dererk Pardon (15 points), is something to build on for the 7-4 Cardinals moving forward, but there was no moral victory following the loss.

“We’re right there. Scoring at the end of the third, scoring at the end of the fourth is huge. Playing from behind is totally different than playing tied or having a one- or two-point lead. That’s, again, what we struggled to do, and hopefully we learn.”
Trailing, 55-53, heading into the final quarter, Mentor was unable to maintain offensively against VASJ (8-0) and the Vikings’ considerable height advantage. The Cardinals scored only six points in the fourth while Bragg and Parker knocked down eight free throws on the way to 17 points in the final frame.

“We defended,” VASJ head coach Babe Kwasniak said. “When we zone — people think, You’re zoning Mentor, you’re zoning a 3-point shooting team.’ We talked about this last year, what it does is it keeps us out of foul trouble.

“Amoeba is a great word (for the zone defense), but yeah, it’s a matchup. It’s something my dad (Tedd Kwasniak) has played for a long time. I despise playing zone, but like Coach (Bob) Krizancic, with our length — they missed a couple of those 3s. Coach Krizancic’s teams, they don’t get tired. People don’t understand, it’s not like they’re going to get tired. So you can say, ‘OK, you’re going to wear them out,’ — you’re not going to wear them out. What our length does on those 3s, it’s tougher to shoot 3s over a 6-10 and a 6-9 guy.”

After starting the game on the bench, for what Kwasniak said was not meeting a team standard, Bragg took over to help the Vikings overcome an early deficit to lead by five at halftime.

"I felt good actually. I'll probably have to get used to it playing college next year," Bragg said of coming off the bench.

Bragg continued his strong evening with 11 of VASJ’s 18 points in the second quarter en route to tying his career-high of 31 points for the third time this season. He also scored the first six points of the third quarter for the Vikings.

“The bigs run the floor really well, and they get down there really quick,” Krizancic said. “Pardon got seven quick points, but it wasn’t out of the offense, it was out of the transition. We talked about — we wanted to get transition shots and limit theirs, but I thought they ran it and scored that many points — they run the floor really, really well. Especially the bigs. And they are a very intelligent basketball team.”

Mentor senior Joey Zaugg was big all night, hitting five 3s and finishing with a team-high 23.

Cardinals center Micah Potter scored nine points in the third after sitting on the bench for most of the first half with foul trouble. Paul Sateika added nine points and Kyle McIntosh chipped in eight points for Mentor in the loss.

The Cardinals made eight 3s.