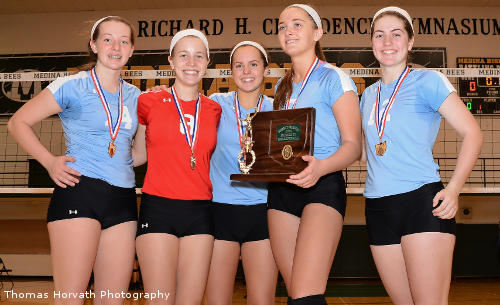 How sweet it is, once again, for the Villa Angela-St. Joseph volleyball team to be back at Solon for the regionals.

Royer credited all six starters for their performance and called the district championship a “complete team win”. VASJ (18-7) got contributions from every girl on the floor in sweeping KCC on Oct. 25.

McKenna Walker and Taylor Sawicki played well and were key in helping the Vikings repeat as district champs.

“Our sophomores came in and played well for us in a high-pressure situation also, which was nice to see,” Royer said. “We had a lot of girls play well. It was a team win.”

VASJ will face Windham in a regional semifinal at Solon High School on Oct. 29.

The VASJ-Windham winner will play the St. Thomas Aquinas-New Philadelphia Tuscarawas C.C. winner for a spot in the state final four on Nov. 1.

The Vikings have swept all three matches thus far in the postseason.