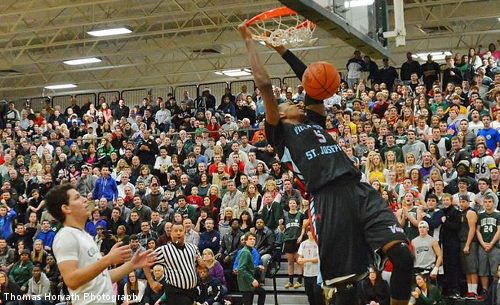 VASJ rolls past Lake Catholic in front of packed house

There was plenty of emotion, anticipation and familiarity for the matchup between Villa Angela-St. Joseph and Lake Catholic on Dec. 20.

Unfortunately for the host Cougars, there was also plenty of firepower for the Vikings.

While Lake Catholic seemed to handle the tournament-type atmosphere fairly well, VASJ proved far too much for the Cougars to handle on the court as the Vikings rolled to a 93-53 victory.

It was the first time the teams had played since the 2010-2011 season – VASJ coach Babe Kwasniak’s first year at the helm of the Vikings. Kwasniak said regardless of the outcome on the scoreboard he hopes to continue the series in the future.

“I want to thank (Lake Catholic) coach Matt Moran for playing the game again. The atmosphere, the crowd was unbelievable. These are two neighborhood schools and it is great to play them again,” Kwasniak said.

“I grew up with the Morans and I just have so much respect for Matt and the family and what he is doing with Lake Catholic. Give them credit, tonight they came right at us. They didn’t change what they do, they didn’t try to slow it up. They are just so well coached and really did some good things in that first half.”

Lake Catholic led by as many as five in the first half before VASJ (5-0) began to settle in. The teams played to a 19-19 tie after one quarter, but led by Brian Parker (18 points) and Simon Texidor (15 points), the Vikings pulled out to a 46-37 lead at halftime.

VASJ star senior Carlton Bragg imposed his will in the third quarter, scoring 14 of his game-high 31 points, including a highlight reel dunk off an alley oop from Jeff Grudzinski. Mo Johnson hit a buzzer beater 3 to give the Vikings a commanding 75-46 edge heading into the fourth quarter.

“Early on we were so amped up and just doing some things we don’t normally do,” Kwasniak said. “It’s not like football where you can go out and hit somebody. It was like we wanted it too much.

“You just try to get better and I think that is what Matt and his guys tried to do. I think we finally were able to grind it out and wear them down a little bit. They really fed off the crowd and came at us early on. Those kids made some tough shots. This is a game I hope we continue to play for a long time.”

Moran was ultra-impressed with the Vikings, but he also was proud of his Cougars (4-1) for their approach against the nationally ranked powerhouse.

“We came out and did what I wanted to see us do which is be fearless. We weren’t going to change how we play and I am proud of our guys for competing and playing hard,” Moran said. “When you play a team like that with their size, and their strength, they can wear you down. I am glad we did this. It was a good test and my hats off to Coach Kwasniak and his guys. It was a great atmosphere in there tonight.”