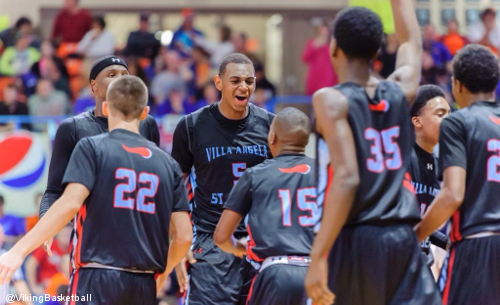 Villa Angela-St. Joseph coach Babe Kwasniak said the Vikings have standards rather than goals they are looking to reach this season.

After several near misses against nationally ranked teams last winter, defeating one of the country’s elite teams was prominent on that list.

High standards have certainly been set for VASJ for the rest of the year after setting the tone for 2014-2015 with a 60-54 victory over Philadelphia Archbishop Carroll at the Marshall County Hoop Fest on Dec. 6 in Benton, Kentucky.

The Patriots were ranked 19th in USA Today’s preseason rankings.

VASJ senior standout Carlton Bragg posted a double-double with 25 points and 13 rebounds and Marist signee Brian Parker added 19 points and two assists for the Vikings, who closed the game on a 12-2 run to open the season with a signature win.

“After being so close last year against some of these nationally ranked teams this was a great win for our guys. It was a lot of fun, not just because Archbishop Carroll is nationally ranked but because they are a very good basketball team,” Kwasniak said.

“Simon Texidor said something that really meant a lot when we were going over our standards, and it was we need to get buckets, we need to get stops and we need to do it all together. We came together and finished and got it done with our defense. And I have to give Coach (Rich) Newlon a lot of credit for the conditioning work he does with our guys. We finished the game strong.”

The Vikings started quickly, ending the first quarter with a 17-10 lead, but struggled mightily in the second, only notching four points on the way to a 25-21 Carroll lead at half.

“What people don’t realize is (point guard) Mo (Johnson) got his third foul and had to come out in the second quarter and for us, it would be like taking Peyton Manning off the field because of his leadership in directing the offense,” Kwasniak said. “We had a horrific second quarter and just stopped moving the ball, but the guys hung in there.”

A Texidor 3-pointer in the third brought VASJ within two points at 32-30, and Parker eventually tied the game at 36 after splitting a pair of free throws. The Vikings took a 40-39 lead in the third on a Parker jumper, but Carroll took a 42-40 lead after three.

VASJ scored the next six points to grab a 58-52 lead and put away the win. VASJ outscored the Patriots, 20-12, in the final quarter.

Northwestern recruit Dererk Pardon was huge defensively for VASJ with five blocks. Jeff Grudzinski came off the bench for some big minutes and knocked down a critical 3-pointer in the second half, and freshman Jerry Higgins saw his first varsity action in the win.

The 9-hour bus ride was predictably easier coming home from Kentucky at 1-0 than it was heading down with an offseason worth of anticipation that included a season-ending loss to Lima Central Catholic in the 2014 Division III state championship game.

“The bus ride home is much more enjoyable than some of those last year after tough losses in games just like this,” Kwasniak said. “It was like looking in a mirror playing Archbishop Carroll. I thought our role players were a little better than theirs. All I know is I am not aware of all the teams in their league in Philadelphia, but I like their chances. That’s a darn good team and Paul Romanczuk is a friend of mine and I have great respect for him.

“The thing is – and the guys all know this – we can play a lot better. We have plenty to work on and lots of room to improve.”