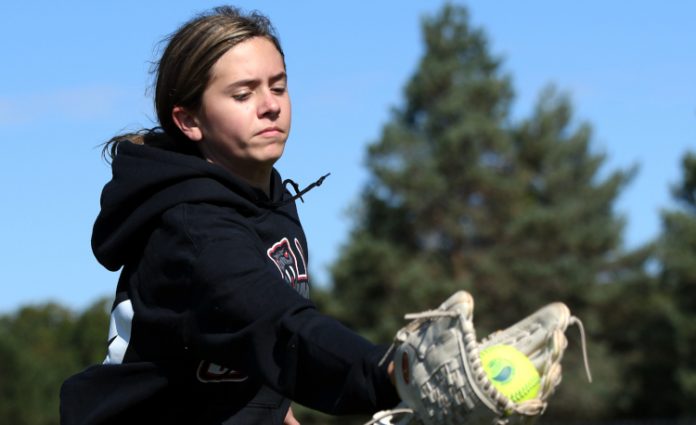 Ohio Varsity Vipers 08/09 continued to roll over its opponents with a dominant win at the Pumpkin Smash Tournament in North Ridgeville over the weekend.

The Vipers entered the tournament on a 10-game winning streak and cruised to a 7-0 record on the weekend. The team is now 24-5-2 during the fall season.

“The key to success was controlling small ball and the running game,” said Vipers coach Greg McIntosh. “Most of the teams we played set up their offense with bunts, stealing bases, and then getting a few big hits.”

Vipers catcher Maya Cormell stepped up in that situation as she threw out three would-be base stealers and prevented others from attempting to take a free base.

“You need a strong catcher and third baseman in those types of games,” McIntosh said. “Maya Cormell was our primary catcher this weekend. Her strong arm kept teams from stealing bases and also her ability to use her quick pickoff move from the catcher position to get runners out at first base. She picked off a runner at first in every game. Nica Dolce played third base primarily and was able to quickly cover bunts and get runners out at first.”

The Vipers opened the tournament on Friday with a 12-3 win over the Ohio Maniacs and a 6-2 win over the Lake Erie Warhawks. They made it three straight tournament wins with a 10-8 win over the Diamond Chix on Saturday, and then close out the event with four straight wins on Sunday.

That four-game sweep on Sunday began with a 12-4 win over the North Coast Crushers-Kennedy. The Vipers then narrowly edged Ohio Energy-Gowdy, 7-6, and then advanced to the championship game with a 12-2 win over Ohio Energy-Percassi.

An 8-5 win over Starzz-McMullen locked up the tournament title.

Five Vipers batted .474 or better on the weekend, providing the offense with the base hits and power it needed to push runs across the board.

Gianna Terlop led the Vipers with a .706 batting average.

She finished the weekend 12-for-17 with five doubles, a triple, and she knocked in three more runs. She also walked five times and scored an astonishing 16 runs in seven games.

Dugach led the team with six doubles and was second with 11 RBI. Newnes posted a team-high two triples and tied Schultz for the team lead with one home run. Schultz was the team leader with 12 RBI.

It wasn’t only the top of the Viper lineup that produced.

“It was nice to see everyone contribute offensively,” McIntosh said. “You expect the top of the lineup to hit but our 7-9 batters–Nica Dolce, Corrine McIntosh and Jenna Poyer–on Sunday combined to hit .370 with eight RBI and a few of those RBI were go-ahead or tying RBI. Allie Dugach had an amazing weekend with six doubles and 11 RBI. Finally, Kyla Newnes had another good tournament at the plate hitting .579 and seven RBI.”

Terlop and Taylor both have the ability to hit for power but also can use their speed to make things happen.

“These two players can hit for power and also beat out a simple ground ball to shortstop,” McIntosh said. “The amount of pressure they put on teams taking extra bases on hits to the outfield, beating out a ground ball, or stealing bases gives us scoring opportunities anytime they are on the bases.”

Schultz threw 25 of the 35 innings pitched.

“Our pitching staff had another good weekend,” McIntosh said. “Gracelyn Schultz pitched the majority of innings but Allie Dugach had two solid starts and also closed the championship game. Sydney Cahill played the role of setup pitcher in the championship game and pitched a scoreless sixth inning in a tie game. Looking at the stats, the pitchers held teams to a .170 batting average with runners in scoring possession. That’s crucial in a tournament where the better teams usually have runners in scoring position each inning.”

The Viper, who earned the No. 1 seed in fall league play, open the postseason on Tuesday and then will close out the fall tournament season at the Monster Mash in Sandusky.

Kirtland surges to win over Berkshire