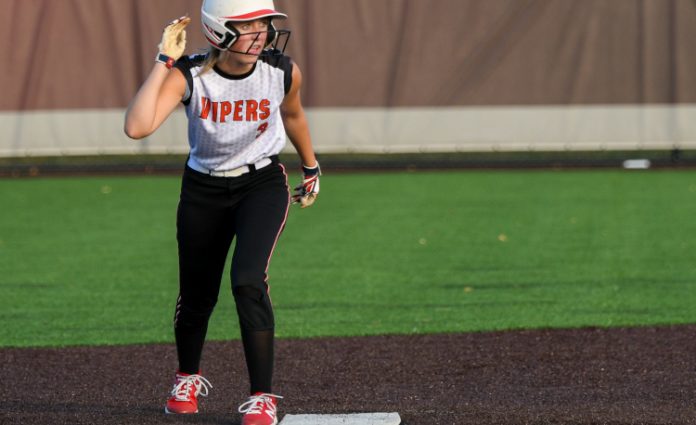 The Ohio Varsity Vipers 16U team finished 2-3 at the 2021 Lasers Fall Showcase at Lou Berliner Park in Columbus over the weekend.

The Vipers dropped their first two games—a 12-7 loss to Ohio Thunder and an 11-5 setback to Lightning Fastpitch—before ending the first day of the tournament with a 9-7 win over Central Ohio Ice.

On Sunday, the Vipers dropped their opener to OFC Heat, 10-1, then closed out the day with an 11-9 win over Pauer-Goodwin.

“It was really fun to get to spend a lot more time with everyone outside of our normal practices and to get to know all of my teammates and coaches better,” said Oliva Sacks (2024 Mentor), who led the Vipers with a .462 batting average over the weekend.

Sacks was one of two Vipers to finish the weekend with a batting average of .400 or better.

She was 6-for-13 with two doubles, five runs scored, two walks, and she knocked in three runs. She also posted a team-high three stolen bases.

“I felt really confident at the plate this weekend after my first couple of at-bats because I found a rhythm that I was able to get into, and that allowed me to stay focused,” Sacks said. “I was also focusing on being aggressive, which helped me to get good contact early in a lot of at-bats.”

For Sacks, she understands the pressure of batting early in the lineup and so far this fall, she has delivered.

“I enjoy the pressure of being early in the lineup and being a team leader because it pushes me to get better individually as well as helping the team to improve,” she said. “Also, as a leader, I think it is very important to lead by example, so I try to be the best teammate possible and pick my teammates up no matter what outcomes we are producing as a team.”

She finished the weekend 2-0 with a 5.13 earned run average and seven strikeouts to just three walks.

“We have a great three-pitcher rotation and I am fortunate to have as many innings as I did,” Scott said. “I really put trust in my catchers and put trust in Coach (Christian) Verde to call my pitches and truly they all took their part in each at-bat. There isn’t a lot of pressure because I know my defense and offense have my back.”

“We played teams that were going to hit the ball, so that meant we needed to put runs up and we did,” Scott said. “It feels good that your offense can provide run support.”

The Vipers return to action next weekend when they travel to Victory Park in North Ridgeville for the 2021 Pumpkin Smash Tournament. The Vipers open up on Saturday at 8:00 a.m.