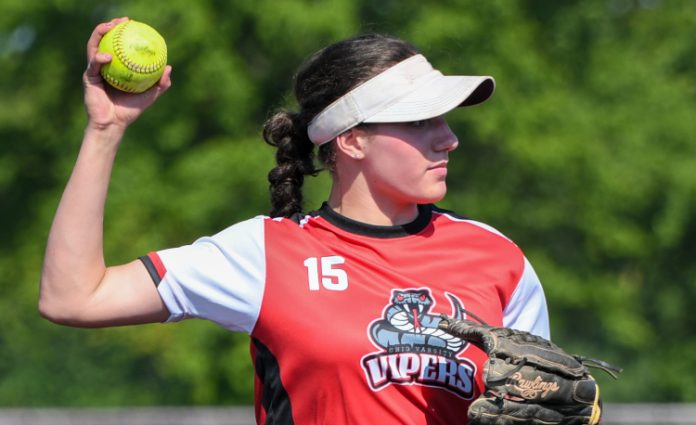 A week off reenergized the Vipers 18U squad who opened the Hopes Turn At Bat Tournament at Todd Field with a 3-0 record in pool play.

The Vipers opened the tournament on Friday with a 7-6 win over the Lady Tigers and then defeated Ohio Energy and the Ohio Warriors on Saturday, 15-2 and 8-3, respectively.

“The girls definitely were excited to go out there and play after being off last week, and being local and not having to sit in the car for an hour and a half to get to the tournament, that was definitely nice for them,” said Vipers coach Jo Bondra. “They came out and played pretty well every single game and we’re ready going into (Sunday).”

Offensively, the Vipers found their groove early and five players hit .556 or better in pool play.

Emma Kovalchuk (Riverside/Lake Erie College) led the Vipers with a .778 batting average (7-for-9) and she knocked in a team-high five runs.

“They were disciplined,” Bondra said of her hitters. “They were swinging at their pitches and not necessarily what the umpire was calling a strike, and that’s something we have been preaching. You don’t have to swing if the umpire is calling a high pitch, just wait until you see your pitch. They were locked in today and ready to get back out there, which was definitely nice to see.”

Outscoring their opponents 30-11 allowed the Vipers pitchers to settle in and focus on throwing strikes.

“We were able to put up a lot of runs in these three games and that was great to see,” Bondra said.

Injuries had decimated the Vipers’ pitching staff over the past couple of weeks but Bondra has solidified the rotation and the Vipers are confident they’ll be in the hunt for the tournament championship on Sunday.

“We’re trying to get some bodies out there,” Bondra said. “If you get into three and four and five games on a Sunday, it’s hard for one or two pitchers to be out there. Now we have some options and we kind of loaded ourselves up with pitchers for this weekend in hopes of playing for the championship and so far, it’s worked out.”

The Vipers open tournament play against the Maniacs at Todd Field on Sunday at 2:00 p.m.