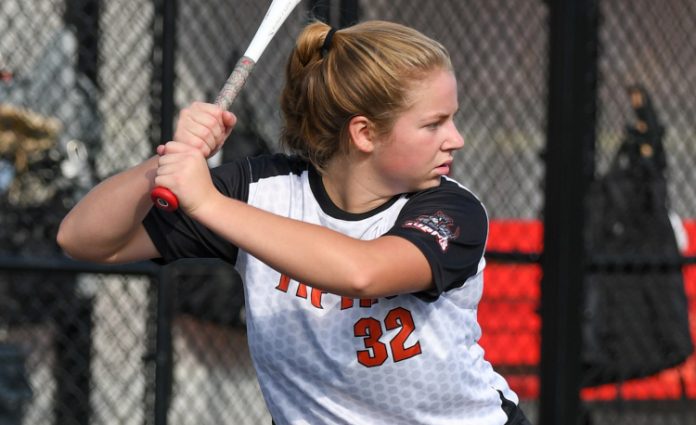 The Ohio Varsity Vipers 18U team won a pair of games at the Diamond Chix Pumpkin Smash Tournament at Victory Park in North Ridgeville on Sunday.

While heavy rains wiped out the first day of the tournament, the Vipers, who improved to 5-2 in their first season as a club, beat FP Select, 6-4, and Explosive 18U, 13-0, on Sunday.

“It felt great to go out and get some wins today,” said Gianna Cantini, a 2022 from Kirtland High School who finished the day 2-for-3 with two runs batted in. “We all knew the rain was coming and we had to get in our best moments when we could and we did exactly that.”

Against FP Select, the Vipers responded to a 1-0 deficit with three runs in the bottom of the first inning.

Nia Guess (2022 Willoughby South) drew a leadoff walk and Leah Temple (2022 Mentor) singled and moved to second to put runners at second and third with no outs.

FP Select regained the lead with three runs on four hits in the second but the Vipers scored three more runs in the third and then held off the Select the rest of the way.

Guess singled to start the third-inning rally and she scored on Temple’s single. Temple would score on a passed ball and Kovalchuk doubled and scored on Cantini’s sacrifice fly.

“It was fun to see Emma Kovalchuk really sell out on a close play at home plate, even though she took a hard tag to the face,” Cantini said.

Guess and Temple both finished the game with two hits.

Temple recorded the pitching victory. She allowed three earned runs on four hits and struck out three in five innings of work.

The Vipers needed just one inning to take care of Explosive 18U.

Megan Mlinaric (2022 Gilmour Academy) fanned two of the three batters she faced in the first inning and then her Vipers teammates took care of the rest.

Guess drew a leadoff walk and Bella Carcioppolo (2022 Mentor) was hit by a pitch. A wild pitch left Vipers at second and third for Temple, who reached on an error and scored on a wild pitch to give the Vipers an early 3-0 lead.

Cantini followed with the Vipers’ fourth double of the inning. She scored on Mlinaric’s RBI single.

“I approached my at-bats today with the mindset of putting my best swing on a good pitch,” said Cantini. “My game elevated when Swaggy B, Bella Carcioppolo, arrived for game two. BSwags rolled up like Jimmy Johns; she’s freaky fast.”

Guess and Mlinaric both finished with two hits and two RBI while Cooper led the Vipers with three runs batted in.

Mlinaric struck out four in two innings of work.

The Vipers closed out their fall schedule and now will focus on their winter league and training sessions to prepare for next spring and summer when they play a full tournament schedule.

“As we head to the offseason, we all need to find our own special motivation,” Cantini said. “In my case, I love hitting shots off the wall. It’s one of my favorite things to do. So, each time I do it, I get really focused on doing it again. Sprinkle in some homers, and I’ll roll right through winter ball.”