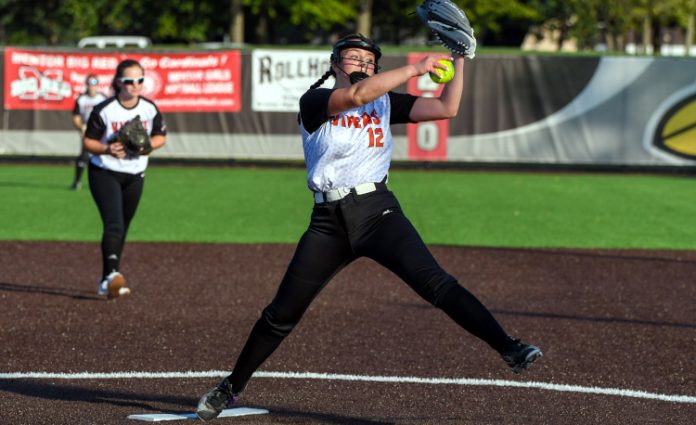 The Ohio Varsity Vipers 16U team won its second straight game on Tuesday by earning a 10-2 five-inning win over the Willoughby Starzz.

The Vipers scored three runs in the top of the first, two in the second, and sealed their second win in club history with a five-run fifth inning.

“After adjusting with the new team since the first scrimmage, I think we have all come really far in trusting each other to make the plays,” said Lilly Jarc (2024 Beaumont), who picked up her first pitching victory. “Today in the circle, I had confidence in my team behind me and I had confidence in myself as a pitcher. With each game, we have become closer as a team and developed a bond that is a key part to winning.”

With a three-run lead before she threw her first pitch, Jarc had the confidence to work through some first-inning jitters to earn her win.

She walked two of the first three batters she faced but a fielder’s choice, a strikeout, and a flyout ended the Starzz threat in the first.

Jarc went on to allow just two earned runs on three hits and she struck out four in four innings of work.

“I was trying to work ahead in the count so I was able to throw some new pitches that I’ve been working on,” she said. “Getting ahead of the batter early is an important strategy to me because some of the pressure is lifted.”

Offensively, the Vipers pounded out eight hits in the five-inning game.

Saxten Ley (2023 Mayfield) was 3-for-3 with three singles and a pair of runs batted in.

“Tonight, it was really satisfying to contribute to our win,” Ley said. “When going up to the plate, I concentrated on staying relaxed and to remember to just have fun. This method works very well for me as it helps calm me down and gives me confidence before going up to the plate.”

Morrison led off the game with a single and moved to second on Ley’s first hit of the game. Both runners moved up on a passed ball and after an Olivia Sacks walk loaded the bases, Morrison scored on a wild pitch that gave the Vipers a 1-0 lead.

The Vipers scored two more run on a fielder’s choice and an error.

Kovalchuk led off the second with a double and scored on Morrison’s single. Morrison moved to second on a passed ball and to third on Ley’s sacrifice bunt. She scored on a Sacks groundout that pushed the Viper lead to 5-0.

The Vipers batted around in the fifth.

Kovalchuk drew a bases-loaded walk and Resnick grounded out to score another run. Ley hit a two-out single to close out the scoring with two more Viper runs.

“Going forward, I intend to build off this success, especially for our upcoming Columbus tournament,” Ley said. “However, I believe the energy we all had tonight was very uplifting and positive. I firmly believe this is what will help us going forward in winning our games.”

Scott pitched one inning in the win. She allowed just one hit in five batters faced.

The Vipers will play in the Lasers Fall Showcase at Lou Berliner Sportspark this weekend.