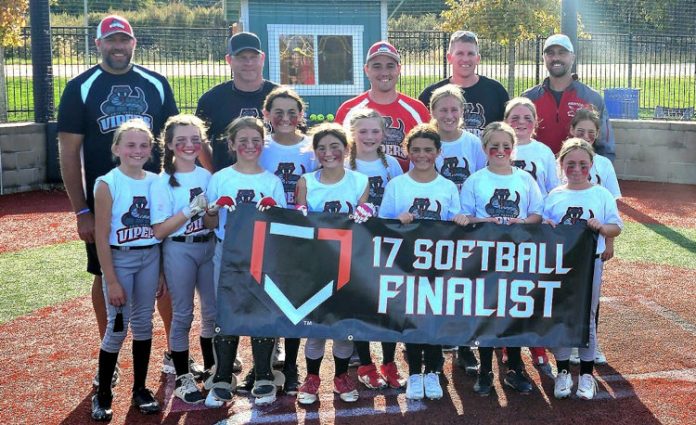 The Ohio Varsity Vipers haunted the competition at the Monster Mash softball tournament at Sports Force Park in Sandusky over the weekend.

Two teams—the 10U and 14U squads—finished as the runners-up in their respective divisions while the others had strong showings.

Brielle Bretz led the 10U team to a 3-1 record as she batted .600 on the weekend with a home run, five runs scored, and two runs batted in. She also stole 10 bases.

Kailyn Mooney, Adalynn Sedmak, and Kamryn Fern each batted above .400 in the tournament.

As a team, the Vipers were successful in stealing 107 bases in 109 tries.

Harper Bammerlin led the team with 13 steals while Fern, Evie Gehrs, and Charlotte Klekar each stole 12.

Bretz threw the bulk of the innings for the Vipers in the circle.

The 10U Vipers opened the tournament on Saturday with a 15-6 win over Interlakes Pride and then knocked off the Semper Fi Bulldogs, 21-5. They picked up where they left off on Sunday with a win over InterLakes Pride, 15-9, before falling to top-seeded Ohio Storm, 19-1, in the championship game.

In the 14U age group, the Vipers went 4-1 with a loss in the championship game.

The team opened the tournament on Saturday with a 4-1 win over Motor City Madness and then ended the day with a dominating 12-3 win over the Akron Racers.

On Sunday, the Vipers won back-to-back games—7-6 over Phantom Fastpitch and 4-2 over PA Lightning—before falling to the Blue Water Wolves in the championship game, 9-3.

Jenna Janezic and Kathryn Bouffard also hit above .400 for the weekend.

Berkowitz and Janezic both went 4-0 in the circle. Janezic struck out 20 in just 15 innings and Berkowitz fanned four in 11 innings of work.

Lanie Cormell and Julia Harvey both hit .667 to lead the 12U team at the plate.

Hannah Welch, Alayna Gross, and Maddy Randall also hit above .400 for the Vipers.

Welch hit .625 with a double and three triples, and a team-high seven RBI. Gross hit .500 while Randall batted .429 with four RBI.

Cormell led the Vipers in the circle with 19 strikeouts in just 12 2/3 innings.

Schultz struck out nine in 10 innings of work in the circle and recorded the only win for the Vipers.

Olivia Sacks continued her assault on the softball as she led the 16U team with a .625 batting average. Sacks doubled and tripled, scored two runs, and knocked in three more. Lily Jarc homered for the Vipers. Kassidy Samuelraj struck out 12 in 11 innings to lead the team.

Vipers 18U stats were unavailable at the time this story was published and will be updated later.