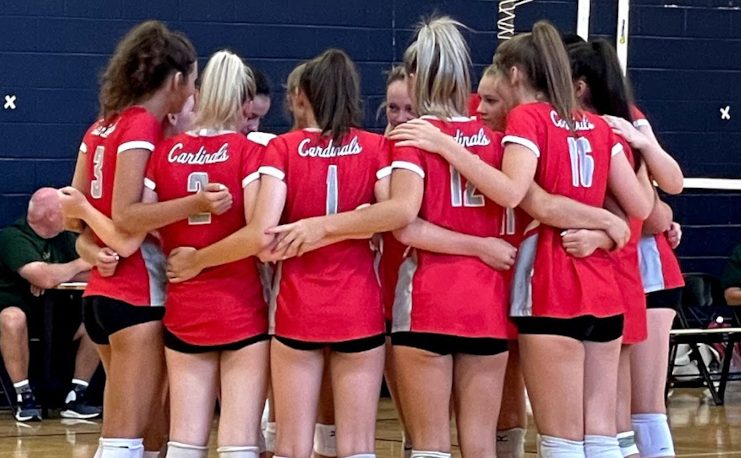 Mentor’s volleyball team’s cup is half full with several key players returning and some talented underclassmen filling the shoes of the graduated seniors.

The Cardinals look to improve upon their 11-9 overall and 6-4 mark in the Greater Cleveland Conference from a season ago.

“The sky’s the limit for us this year,” said Mentor coach Samantha Muzic. “We have returning leadership in key roles such as our setters and passers, but we have youth in other places with freshmen and sophomore hitters joining the team this year. This group meshes really well together, and I’m excited to see our juniors and seniors lead our underclassmen to excel on the court in key roles.”

Mentor graduated all-conference hitters Ella Rogers and Molly Stayer and will be young in these roles, but the Cardinals added size up front and Muzic is confident her squad can minimize its weaknesses.

“We lost both of our outside hitters to graduation and they are both playing at the collegiate level. We will have a sophomore and freshman taking these roles over, and I’m excited to see how they take on the challenge,” she said. “We’ve gotten a lot bigger in the front row this year. We’re able to add in 6-foot-2 Kylie Maxwell to the middle, who was out last year to injury, 6-1 middle Gwyn Gill, 6-0 setter Anna English, and 5-10 outside hitter Kayden McKinney, and we’re able to have a whole different dynamic across the front row. How young we are as a team could be seen as a weakness in the beginning, but I believe that they’re ready for their shot and want to make a huge contribution this year. This will only make us better, not just this year, but in the future as well.”

“Sam has been one of our starting setters all three years she has been in the program, but is currently out with an ankle injury,” Muzic said. “When she returns, she’ll be back to business with Anna English and they’ll both lead this team as our dynamic duo like they have in the past. Sam is a phenomenal setter and server who commands the offense like a pro. She’s a fantastic all-around athlete who we can’t wait to see back out there when she’s ready.”

English, a senior and a Mount Union commitment, can set and also provide the Cardinals with another blocker when in the front row.

“Anna will begin this season with a 5-1 and has really taken on this role head-on. She puts in the work every single day to make her hitters better and is the true definition of a fantastic teammate. She’s verbally committed to play at Mount Union next year, and being 6’0 she provides us with a great blocking foundation when she’s in the front row.

Kerul is a libero while Maxwell is a middle and Popp will attack from the right side.

“Jessi is a former outside hitter who has transformed into a libero. She is as steady and even-keeled as they come. She leads not only by her actions on and off the court, but she commands our back row phenomenally. The coaching staff and her teammates know that we can always count on her and trust her back there and she provides such a great foundation for our defense and serve receive,” Muzic said. “Kylie missed last year due to injury but she has come back better than ever. She’s a phenomenal basketball player, so even though she missed our court last year, she’s in great shape and is one of the quickest middles I’ve seen. She reads extremely well and really helps our front row with her ability to close a block and run a fast offense. Sam is another player who excelled this offseason and came ready to do it all. She has proven to us that not only can she swing on the right side but her blocking and passing have been an added bonus to add to our team this year as well.”

Gill will play in the middle and Rhodes is an outside hitter.

“Gwyn has taken this past year and really proven she is a true middle. Her physicality at the net, along with her ability to really run any set we need, is huge for our offense. I am very excited to see Gwyn really take on her role this year because she is going to be a threat in the middle for us in every match this year,” Muzic said. “Chloe is a sophomore who is ready to take on a huge role this year. Being the eldest of our outsides in the entire program, she’s going to play a role not only offensively but defensively as well. She is able to hit shots consistently all over the court, which just added to what we are able to do at the net. Being able to be a six-rotation outside hitter is something we really strive for as a program, and Chloe has shown she’s ready for both at the varsity level.”

McKinney is an outside while Garrett is a right side hitter.

“Our other outside hitter, I’m excited to see Kayden come to her own at the varsity level as a freshman. Being close to 5-10, she’s a big force at the net and has an incredibly powerful swing. She’s able to swing from anywhere, which just adds so much to our offense. She’s extremely competitive and definitely plays like a seasoned vet. She’s going to help us be a force on the outside for the next couple of years,” Muzic said. “Mel is another freshman that we expect to make an immediate contribution to the varsity team. She is able to do it all and do it all well. She can swing on the right side as a lefty while also being one of the top passers in the program. Mel is outstanding in every aspect of the game; another one who definitely plays like she’s been at the varsity level for many years. I’m very excited to see how Mel is able to add to our team this year in so many different ways.”

“Anna will make an impact this year for us as a DS. She is a vocal leader who is ready to help Jessi in the back row and make us phenomenal in serve receive and defense,” Muzic said. “Ava is a first-year varsity player who I’m very excited to see succeed at this level. She is a great teammate and leads by example. She will just add to the depth of our back row as another steady force for our team. Kara has worked so hard this offseason to be a middle at the varsity level. She can run any set we need and is another fantastic teammate. Kara really helps bring the energy every day at practice and is so helpful in terms of adding depth to the middle for us.”

Mentor’s success hinges on the Cardinals developing into a cohesive unit and their younger and inexperienced players quickly developing in their roles.

“We’ll need to continue to work together as a team, especially when things get hard, which is inevitable in any sport,” Muzic said. “We have varying degrees of varsity experience but I do believe our upperclassmen are extremely strong leaders who want to succeed with our underclassmen playing a pivotal role in our successes. All of our hitters are able to not only contribute in the front row but also will play a huge role in our passing game; this will only lead us to be more versatile as our entire roster can play in multiple positions across the court.”

Mentor shoots for the GCC title