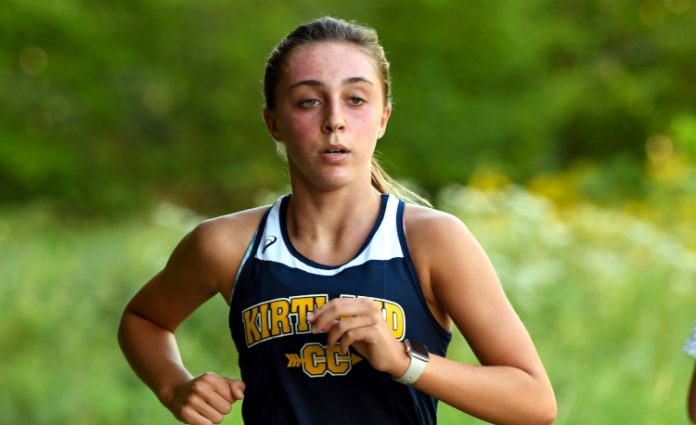 Kirtland freshman Sylvia Vosicky emerged this fall as a talented runner who has finished near the top of the pack in every race.

On Saturday, Vosicky won her first invitational title by finishing in 22:17 at the inaugural Berkshire Fall Classic at Oberland Park in Newbury.

“Running down the chute was by far the most thrilling part of the race,” Vosicky said. “Throughout the stretch leading up to the finish, I gave it all that I had left and everyone was cheering for me regardless of the team I was on.

Vosicky took advantage of the mostly flat terrain to speed up her pace throughout the race.

“A lot of the course was through the woods and flat, which I took advantage of,” she said. “I was able to speed up my pace and distract myself better through the woods and save a lot of energy for the finish. I was satisfied with my time because I figured that if I got the place I did with it, I shouldn’t be disappointed, although it did match my current PR, which was a little bit disappointing.”

Now that she has an invitational win to her credit, Vosicky is even more confident about her potential in the postseason.

“I’ve gained a lot of confidence this season because I haven’t had a bad race so far,” she said. “I haven’t been any less than satisfied with my results for every race, but of course, everything is about your mindset which helped me gain confidence by setting the right one for the season.”

Ainsley Borthwick, Stephanie Drazetic, and Delaney Kuczkowski also placed among the top 10, which led the Hornets to a second-place finish as a team. Borthwick was fifth in 24:15, Drazetic placed seventh in 24:22, and Kuczkowski finished eighth in 24:25.