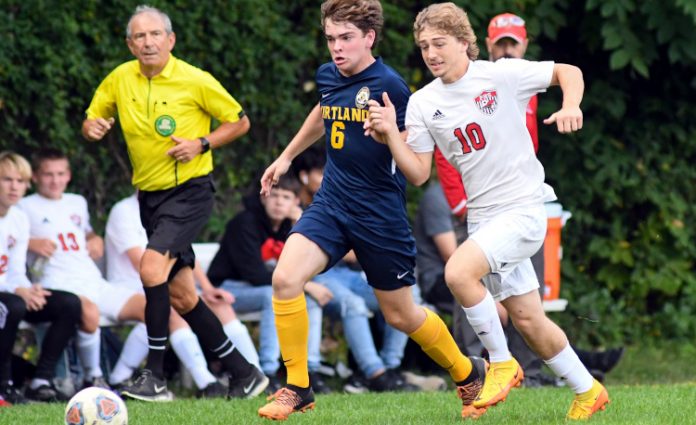 KIRTLAND—Vincent Vukovic scored a goal in each half in leading Kirtland to a 5-0 shutout of visiting Perry on Monday.

With the win, the young Hornets extended their winning streak to five straight games and improved to 6-1 on the year.

“There’s always room for improvement,” said Kirtland coach John Valentic. “I liked our movement off the ball. It’s getting better and my halftime focus was on trying to get more guys around the ball to give each other support. I think we got a little lazy in supporting the guy with the ball but that improved in the second half and you can tell with the chances we created and obviously, we scored some more goals. That was a good sign after the weekend and no training before the match.”

Luka Oroz scored his first goal of the season to give the Hornets a 1-0 lead with 29:03 left in the first half.

Vukovic scored the first of his two with 5:44 left before the break and he scored again just 41 seconds into the second half.

Vince Carriero and Anand Sundararajan scored back-to-back goals at the 13:50 and 13:03 mark.

Carriero also assisted on a pair of goals and Austin Leland and Dan Bak both recorded one assist.

“I think the boys realize that the big the big guns are gone from last year and this is their team and every one of them needs to contribute,” Valentic said of the versatility on offense. “From the freshmen that are getting minutes to the defenders, we’re going to need everyone. I think they realize that it’s going to take all 15 guys to contribute.”

Kirtland’s defense recorded its fourth shutout of the season.

“I’m really happy with the pressure and not letting those chances happen,” Valentic said of limiting Perry’s scoring opportunities. “If we can deny service in the midfield and then if the ball gets played in the forwards or we can close them down, I think that’s the key. If we can do that going forward, we’ll hopefully continue to have success defensively.”

Jack Green turned away several Pirate shots to protect his clean sheet. He finished the game with four saves.

“Save the ones that are hit at you and be in good spots so you’re not in too much of a challenge,” Valentic said of Green’s performance. “He’s been steady and he has a couple of shutouts already this year. I can’t ask for more than that.”

The Hornets travel to Crestwood on Tuesday.

Kirtland bounces back with win over Elyria Catholic