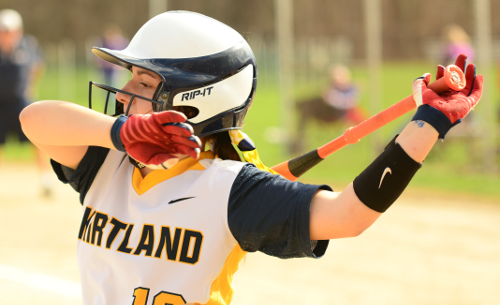 Kirtland and junior Hallie Ward shook off a disastrous start at Fairport Harding to defeat the Skippers, 8-7, in eight innings on Wednesday. The Hornets, who improved to 1-2 on the year, scored two runs in the top of the first only to have the Skippers score five in their half of the inning.

Undeterred, the Hornets chipped away at their deficit and took the lead when Ward tripled with one out in the top of the eighth and scored on Samantha Achauer’s infield ground ball.

“It’s great for the team,” said Kirtland coach Tony Scibelli. “We really needed something like this to energize us.”

Ward, the Hornets’ leadoff hitter, scored four of Kirtland’s eight runs and finished the day 4-for-5 at the plate with a double and the triple that led to the winning run.

“That triple in the eighth was huge,” Scibelli said. “Scoring four runs too, she’s a spark plug for our offense.”

Ward opened the game with a single then stole second. Olivia Mancisio drew a one out walk to put runners on second for Sarah Steigerwald, who triple to give the Hornets an early 2-0 lead.

The Skippers, who dropped to 1-3 overall and 0-1 in the Chagrin Valley Conference, responded with five runs on four hits, a walk and a hit batter.

Kirtland pulled to within 5-4 in the top of the second when Ward doubled home Morgan Faber, who had singled, then scored on a ground out.

Ward tied the game in the third when she singled with two outs, stole two bases and scored on an infield grounder.

Both teams scored single runs in both the sixth and seventh innings to force the extra frame.

“Give Fairport credit,” Scibelli said. “They put the ball in play and made good things happen. I don’t know if it was nerves or if Fairport just came out red hot but they took it to us that first inning.”

Faber found her groove after that first inning to claim her first varsity pitching win.

“She came back and was finding her spots a little more as the game went on,” Scibelli said. “The defense also was helping her too, making some nice plays. Things just started to work for her.”

The Hornets travel to Harvey on Friday.