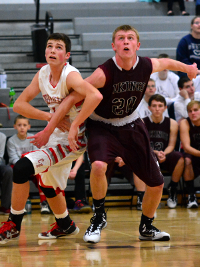 MIDDLEFIELD—Cardinal coach Jon Cummins expected his young team to experience some growing pains this season. He saw that in action in Saturday’s 61-50 loss to visiting Waterloo.

The Vikings opened the fourth quarter on a 10-2 run to pull away from the Huskies.

“It’s inexperience,” Cummins said. “It comes back to bite us a lot. We need some experienced guys to take over on the floor and make decisions to run our offense. There’s not much experience or leadership to do that. We’re figuring it out.”

Waterloo led 10-9 after the first quarter and led by as many as seven points in both the second and third quarters before the Huskies rallied to cut Waterloo’s lead to 23-20 at the break and 35-33 after the third.

Seniors Collin Michalec and Bob Watson dominated the fourth quarter for the Vikings. Michalec scored 10 of his game-high 23 points in the period and Watson dropped in 12 of his 21 points in the final 12 minutes.

Five of the six Vikings to score are seniors.

“They’ve played a lot together,” Cummins said. “That should be a winnable game and we win winnable games but we didn’t. We just have to get back to it on Monday and work harder.”

A Jake Francis bucket early in the second quarter gave the Huskies an 11-9 lead, their first of the game, but Austin Bozek followed that up with a 3-pointer to put the Vikings back on top. Cody Hunt responded with a layup to give the Huskies a 13-12 lead but that would be the last time Cardinal held the advantage.

Michalec opened the fourth quarter with a pair of free throws to push Waterloo’s lead to 37-33 but Cardinal’s Cody Naftzger responded with a basket to keep the Husky deficit at just one basket. Watson then scored the next eight points to give Waterloo a 10-point lead.

The Huskies never recovered, primarily due to their struggles at the free throw line.

While the Vikings converted on 22-of-28 free throw opportunities, including their last four, the Huskies were just 10-of-21 from the line.

“(Tamburro and Naftzger) played a lot more minutes in the second half,” Cummins said. “I did the five in, five out thing in the first half to get a feel for some of the kids to see how they were going to play. Cody Naftzger came out and did a lot of things for us in the first half and gave us a lot of energy. I put him in there right away in the second half because he needed to be out there. We went with a more traditional play with five to eight guys. They played much better. Jerry was attacking better, especially in the fourth quarter when he scored a lot of his points.”

Cardinal travels to Ledgemont on Tuesday.