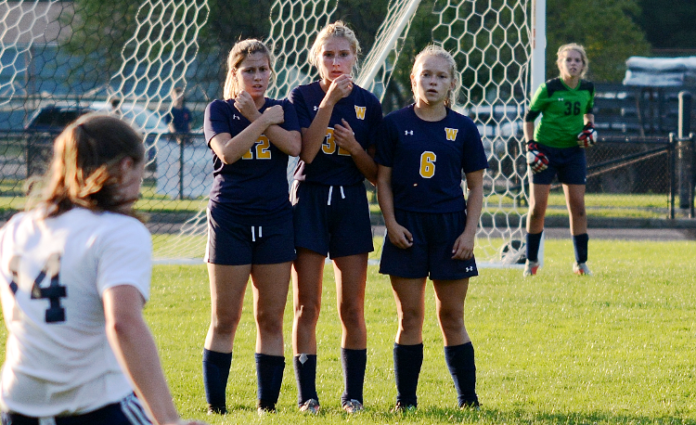 Jenna Melaragno and Caitlyn Henderson both scored two goals to lead Wickliffe to an 8-2 win over visiting Cardinal in a Chagrin Valley Conference Valley Division showdown on Thursday.

The Blue Devils led 6-0 at halftime in improving to 7-1 overall and 3-1 in league play.

“We emphasized more team play today,” said Wickliffe coach Steve Gribovicz. “The girls used passes and off the ball movement to achieve success in the game. Our younger players had some opportunities in this game and took advantage of them to showcase their work. Overall, we played a solid team game to reach the result.”

Gianna Ranallo, Ana Stjepanovic and Shayla Landi also scored for the Blue Devils, who benefitted from an own goal.

Bryanna Butler, Morgan Gabriel, Stjepanovic and Landi all had assists in the win.

“After feeling out the first 10 minutes, our offense began to connect some passes in the midfield level which sprung opportunities on offense,” Gribovicz said. “Our defense was attacking the ball at midfield to help set up the offense. We really had to push ourselves to match the effort that Cardinal was giving on the field. The steps we made in this game could go a long way as the season progresses.”

“The girls put a ton of effort and heart into this game,” said Cardinal assistant coach Vanessa Pintabona. “Their biggest strength as a team is not giving up no matter what the scoreboard says; they always fight until the end. Daisy Robinson’s second-half goal was a perfect example of this. She broke through the defense and made a clean, controlled shot.”

Valentine scored on a penalty kick.

“It was perfectly placed in the lower left corner,” Pintabona said. “All of the girls have been working really hard at practice and it’s awesome when you see one that’s been working to master a specific skill really nail it in a game. We saw a lot of that tonight against Wickliffe.”

Evans-Roskos dishes out three assists in win over Wickliffe

Hornets put it all together at Cardinal